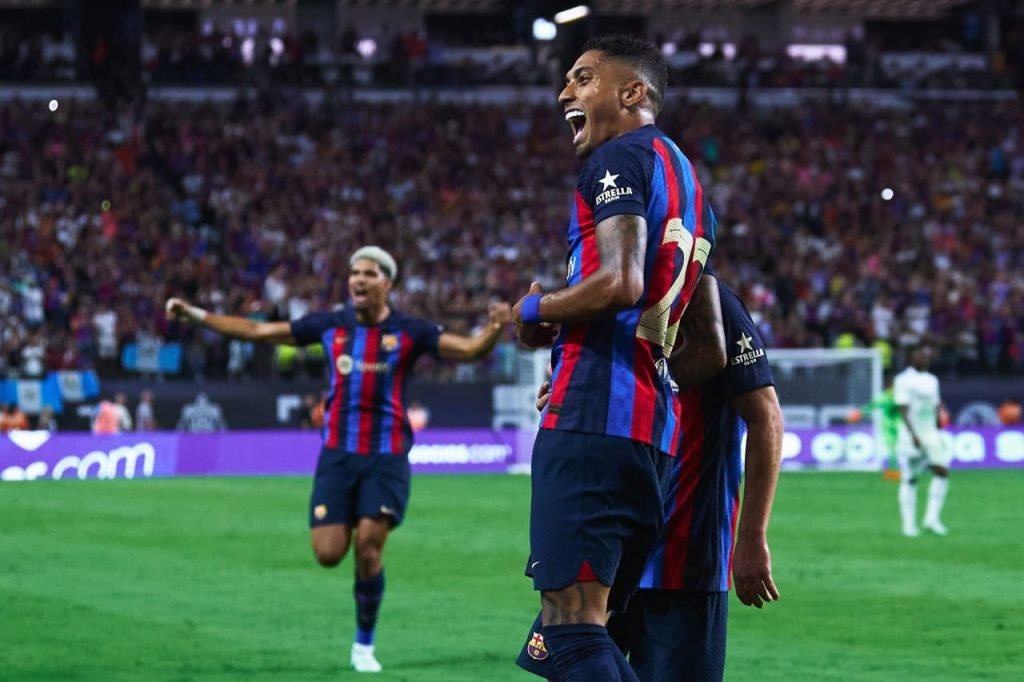 Grab your Spain football tickets online and get the chance to live the passion of a LaLiga game with local fans at the stadium!

The Spanish LaLiga is the best football league in the world, with arguably the most competitive teams playing each week.

LaLiga is one of the most exciting football leagues in the world. Since the Spanish Primera División began, it has been dominated by two clubs – Real Madrid and FC Barcelona.

However, Atlético de Madrid and Sevilla FC have been very serious contender the last years.

That is why Spain football tickets are have usually a very high demand.

Once in the stadium, you will see what true passion is all about and you will become the witness of an incredibly offensive and technical football. A great experience any true football fan would not want to miss on.

FC Barcelona is currently considered one of the best football teams in the world. Barcelona is one the most successful clubs in Spanish football together with Real Madrid, having won an impressive number of both national and international titles. In 2009, Barcelona became the first club in Spain to win La Liga, Copa del Rey and Champions League at the same time.

For those who consider themselves genuine football fans, watching Barça play at the mighty Camp Nou stadium is a must. Buy your FC Barcelona tickets and cheer your team to victory! Tickets are available for all seating categories at the Camp Nou stadium.

Camp Nou stadium is one of the world’s most iconic football arenas and has been home to many “Clásicos” – matches between Barça and Real Madrid. The Camp Nou Experience gives you the chance to visit Barcelona FC stadium.

Walk through the most emblematic areas of the Camp Nou including:

If you like football or are a FC Barcelona supporter, don’t miss the opportunity to visit this fabulous stadium and get to see all the club’s trophies.

Real Madrid Futbol Club is the most successful club in Spanish Football, having won a huge number of LaLiga titles, Spanish Cups and Spanish Super Cups. The club has also been brilliant globally, winning many international titles including lots of Champions League.

Real Madrid is the most awarded soccer club ever and was awarded with the recognition of “FIFA Club of the 20th Century”. See live the best football club in history with these great ticket options!

Only at the Bernabéu Tour can you see the stadium through the eyes of Real Madrid champions. Or get even closer to the world of Real Madrid FC and share 110+ years of football in the award-winning Museum. Whether you’re a club fan or not, a visit to the Santiago Bernabéu is a day to remember!

Apart from the impressive trophy room, you can see the field enjoying a panoramic view, walking around the pitch and from the presidential balcony. Don’t miss the player’s tunnel, the coaching area and the first team dressing room where the main stars prepare before a match.

Make your Madridista dream true and visit all the hidden corners and legendary places you’ve only seen on TV. The Bernabéu welcomes you!

Booking your Atlético de Madrid tickets in advance offers you the entry into the stadium. Don’t miss the opportunity to watch a match of one of the hottest European football leagues.

Get your Spanish soccer tickets and attend an electrifying match. Buy this season’s tickets, you will never forget the experience of seeing how the great talents fight with all that they have to win the most well-regarded titles of the world.

Go to the Estadio Cívitas Metropolitano

The home matches of Club Atlético de Madrid take place at the Estadio Cívitas Metropolitano. The stadium was inaugurated in 2017, as a replacement of the Estadio Vicente Calderón. It has a capacity of 67,700 people.

Apart from going to a match, you can also visit the whole stadium and a large part of the premises, including the player’s dressing room and the field grass!

Seeing a LaLiga game means seeing the best football clubs in the world.

The spectacle from top players to the stadium itself is not just a dream come true for football fans but a great way to get in touch with Spanish culture.

Whether you are right up front or up in the nosebleeds for most football fans it will barely even matter.

Seeing some of football’s greatest players in some of the world’s great stadiums will provide memories of a lifetime.

But to do this you have got to get you Spain football tickets first.