I have been lucky enough to live in Seville, a beautiful city located in the South of Spain, for several years. My love for it led me to create Seville Traveller, an independent online travel guide with over 25,000 monthly readers and the free guide 'Seville For The First Time'. Continue reading... 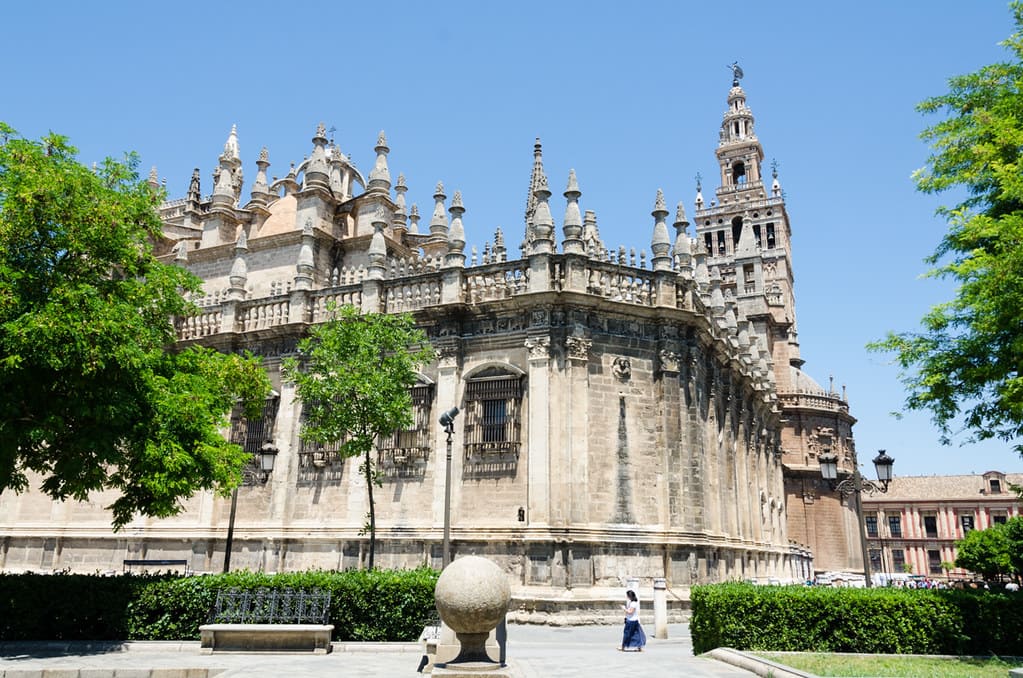 The Seville Cathedral is the biggest Gothic cathedral in the world and also the 3rd biggest one in terms of size, after Saint Peter (the Vatican) and Saint Paul (London, UK). Its construction started in 1401, after the Christians reconquered Seville, and it ended in 1506.

Website: Cathedral of Seville & Giralda tower (only in Spanish)

Entrance: (It allows you to enter both the Cathedral and the Giralda)

Reduced ticket (Seniors and Students under 26): 3 €

Free (Born or residing in Sevilla, Children under 16 accompanied by an adult, Disabled and an escort, Unemployed)

To purchase a reduced ticket or have the right to enter free, you must have with you an official document proving your status. Don’t forget it at home or you accommodation…

By the way, the opening hours can be modified due to religious ceremonies and other cultural activities. Make sure you check the Cathedral’s calendar to confirm visits are allowed.

Initially, the Moors built a mosque exactly at the same location and the works lasted 26 years (1172-1198). The main part of the Giralda tower and the Courtyard of the Orange Trees (Patio de los Naranjos) are the only remaining parts of the original mosque. The bell tower was the minaret and the courtyard was the ablutions patio, where the faithful washed themselves as part of the Islamic rite.

The Seville Cathedral was built for two main reasons. The first one is that the old mosque was in very poor conditions after the 1356 earthquake. And the second one is because the rulers of Seville decided to build a new temple in 1401 to demonstrate the city wealth and the Christian’s domination over the Muslims.

Unfortunately, five years after its completion, one of the main pillars collapsed and the dome was almost completely destroyed. The recovery works ended in 1519. Over the centuries, chapels and other additions related to the Cathedral were built, resulting in the complex you can see today.

Guided tours of the Seville Cathedral

One of the best ways to get to know the history of Seville is by booking a 3-hour guided tour of the Cathedral.

Your guide will make you step back in time while showing you the best masterpieces of this magnificent building. She will also give you lots insights into the Spanish culture and other picturesque landmarks. It may be the best money you spend in Seville!

The idea of the city rulers was to build a church “so beautiful and so great that those who see it will think we were mad“. And so they did…

You can enter the Cathedral through one of the eight doors.

The altarpiece (retablo) is also the biggest one in Spain and one of the most impressive of the Christian world. It was designed and carved by a Flemish called Pierre Dancart who ended up with an altarpiece measuring 30 m (98 ft) high and 20 m (66 ft) wide. The works continued for over a century with further additions and carvings, all in gold.

The Cathedral of Seville is the burial site of Christopher Columbus and Fernando III of Castile.

1. In the case of Columbus, there is actually a lot of uncertainty. He died in Valladolid (Spain) in 1506 and was first buried there. Then, his remains were transferred to the Santa María de las Cuevas Monastery (the Contemporary Art Centre today), from there to the island of Hispaniola (today Dominican Republic) in 1542. In 1795 France invaded the island and they were moved to Havana (Cuba). Finally, when Cuba became independent, the remains were moved back to the Seville Cathedral.

However, some claim that he is still buried in Dominican Republic, after a box with bone fragments and an inscription was found there in 1877. Despite DNA investigations run only in Seville (the Dominican authorities did not allow the exhumation), it is still a mistery if the Christopher Columbus tomb truly contains his remains…

2. Fernando III of Castile was king from 1199 to 1252, first of Castile, then León and finally Galicia (different regions of Spain). He was one of the first kings to unite the Middle Age kingdoms. He was canonized in 1671 and became San Fernando (Saint Ferdinand) or Fernando el Santo (Ferdinand the Saint).

The Seville Cathedral is surrounded by small columns linked by huge chains. These chains were placed in 1565 to prevent the merchants from entering the temple with their horses when the weather was bad. It also marked the boundaries of the sacred places, where the civil justice could not be enforced. People used to go there looking for protection and redemption.

The Virgin of the Kings (Virgen de los Reyes) crown has 11,960 precious stones and it’s made of 22 carat gold.

The North façade has a collection of busts from the Sevillian sculptor Susillo, each one representing an important personality related to the city (Murillo, Herrera, Daoiz, Bartolomé de las Casas, Velázquez, Montañés).