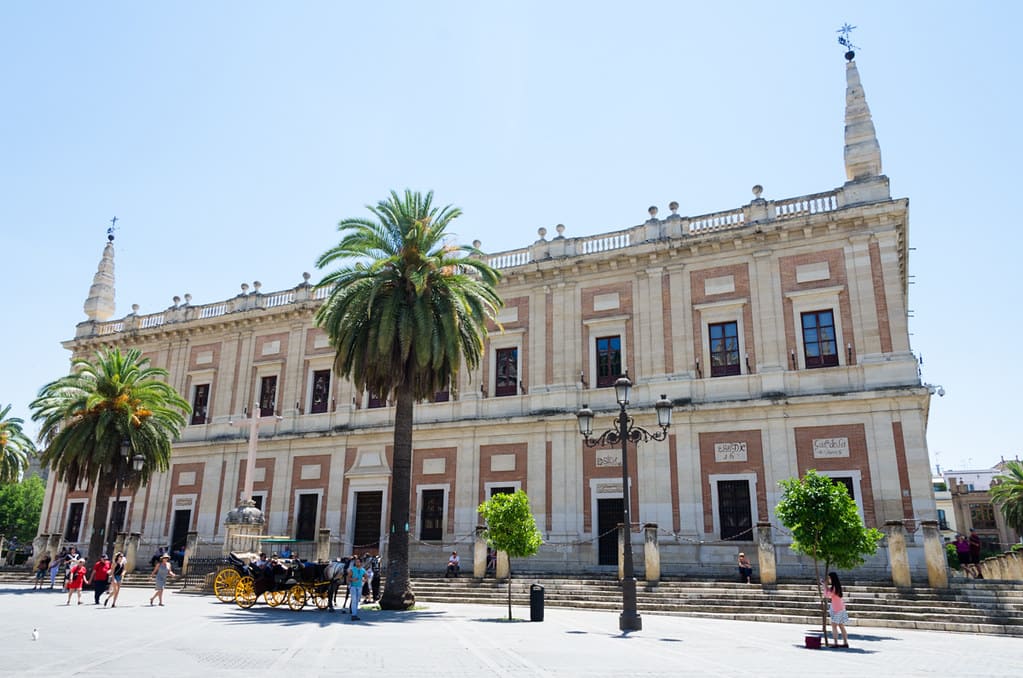 The Archivo de Indias or Archive of the Indies is an institution responsible for the custody and conservation of all the documents related to the Spanish colonies. It covers more than three centuries of history of a vast territory including the American continent as well as the Philippines.

The archive building is located in the city center, between the Cathedral and the Alcazar. You can visit both the permanent collection and the temporary exhibits that are organized from time to time.

Also free. There are two daily guided visits for the exhibitions, one at 12:00 and another one at 13:00.

Origins of the Archivo de Indias

The Archivo General de Indias was created in 1785 by Carlos III, with the aim of keeping in a single place the documents referred to the Indies, as Spaniards used to call their American colonies and, later on, the whole overseas Empire. It’s a reminiscence of Columbus’ mistake when he first thought he’d arrived to India, instead of a continent the Europeans didn’t know about?

Until then, all those documents were scattered in Simancas (a small town near Valladolid that held the Crown of Castile archive), Madrid, Cádiz and Seville.

Today, the Archivo General de Indias keeps more than 43,000 bundles, stored in eight kilometers of shelves, with about 80 million original document pages and more than 8,000 maps and drawings!

It’s basically a huge database containing around three centuries of history (from the 16th to the 19th century approximately). In fact, it’s the history of a whole continent, from Tierra del Fuego in Argentina to the south of the United States, and that of the Spanish Far East (the Philippines).

Among this enormous quantity of paper, there are signed documents of Pizarro, Cortés and other main conquerors (conquistadores). The journal of Columbus, and Cervantes request for an official position in the colonies, are there as well. Another important document is the 1493 bull of Pope Alexander VI, dividing the world between Spain (Flanders, Italy, the Philippines, and America except Brazil) and Portugal (Brazil and coastal colonies in Africa, India and South East Asia).

Details about the building

The building was originally the Market House of Seville (Lonja de Mercaderes). It was constructed at the time of Felipe II, in 1572, after an Archdiocese’s request. The Archbishop complained because the traders used the stairs and even the interior of the Cathedral to place their stalls when it was raining or the heat was almost unbearable. He obviously considered that the Cathedral was a place of worship and not a market!

The building started to be used in 1598 although the works finished in 1629, when the second floor was finally completed.

When it was decided that it would hold the Archivo de Indias, the building was under renovation for quite a while. As a result, the main staircase was fully decorated and a series of shelves made with Cuban wood were placed in the rooms to organize the documents.