The Giralda Tower is the symbol of Seville 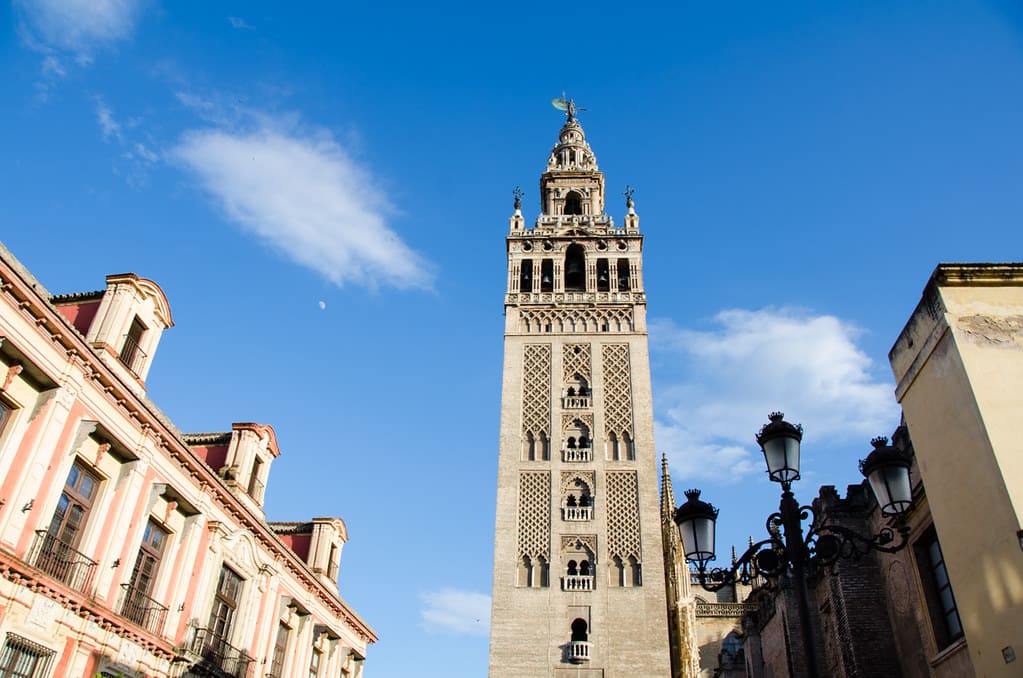 The Giralda tower is one of the highlights of Seville and one of its most representative buildings. It is the most visited monument of the city along with the Cathedral and you should definitely not miss it.

The importance of the Giralda is justified because it is the bell tower of one of the largest churches in the world (the Cathedral of Seville is the 3rd biggest one in the world) and also, because it is one of the finest examples of the cultural blend that defines Spain.

Website: Cathedral of Seville & Giralda tower (only in Spanish)

Entrance: (It allows you to enter both the Cathedral and the Giralda)

Reduced ticket (Seniors and Students under 26): 3 €

Free (Born or residing in Sevilla, Children under 16 accompanied by an adult, Disabled and an escort, Unemployed)

To purchase a reduced ticket or have the right to enter free, you must have with you an official document proving your status. Don’t forget it at home or you accommodation…

By the way, the opening hours can be modified due to religious ceremonies and other cultural activities. Make sure you check the Cathedral calendar to confirm visits are allowed.

Origins of the Giralda Tower

The Arab invasion lasted for almost eight centuries until in 1492 the Catholic Kings expelled the Arabs. During that time, Moorish Iberia (Spain and Portugal today) was called Al-Andalus. Moreover, Seville was designated as the capital during the Almohad period (1121-1269) and it was decided that a great mosque had to be founded.

The Giralda tower is probably the most ancient building of Seville. It was built between 1184 and 1198 to be the minaret of this great mosque. Its design is based on the minaret of the Koutoubia, the most important mosque of Morocco, located in Marrakech.

Originally, the minaret had a copper sphere on top of it. It disappeared after a strong earthquake in 1365.

At present, the main body of the tower is the minaret itself and it is a fine example of the Arab architecture of the time. You’ll notice in other monuments that this style has been both a symbol and an inspiration of constructions all over Seville (e.g. the Torre del Oro or the Alcázar).

Guided tours of the Seville Giralda (and Cathedral)

One of the best ways to get to know the history of Seville is by booking a 3-hour guided tour of the Cathedral that includes also the Giralda.

Your guide will make you step back in time while showing you the best masterpieces of this magnificent building, as weel as its gorgeous tower. She will also give you lots insights into the Spanish culture and other picturesque landmarks. You won’t regret booking this tour!

Additions to the original building

When the Arabs left, the mosque was transformed in a church, the Giralda became its bell tower and the Christians placed a cross and a bell on top of it. During the 16th century, a Renaissance section was added to include more bells.

In 1568, the architect Hernán Ruíz was commissioned by the city hall to design a statue that would represent the Christian Faith. The statue stands 4 m (13 ft) in height and it is still there today.

Almost at the tip of the tower, you can read the following words “TURRIS FORTISSIMA NOMEN DNI PROVERB. 18” which means “The name of the Lord is a strong tower” in Latin and it is a proverb of the Bible (proverbs, 18:10).

This section of the tower also contains a large inscription of Seville’s motto, NO8DO. Alfonso X of Castile gave the motto to the city when it continued to support his rule while his son was trying to usurp him the throne (1282).

Curiosities about the Giralda Tower

The Giralda Tower (not so) hidden bonus!

The Giralda tower is 97.5 m high (320 ft) and you can climb to the top. Actually, you should because the views from there are absolutely gorgeous.

The bad news is that there is no elevator!

But, fortunately, the sultan ordered to build 35 ramps instead of steps so that the muezzin could ride a horse to the top to recite the Adhan (call to prayer)…