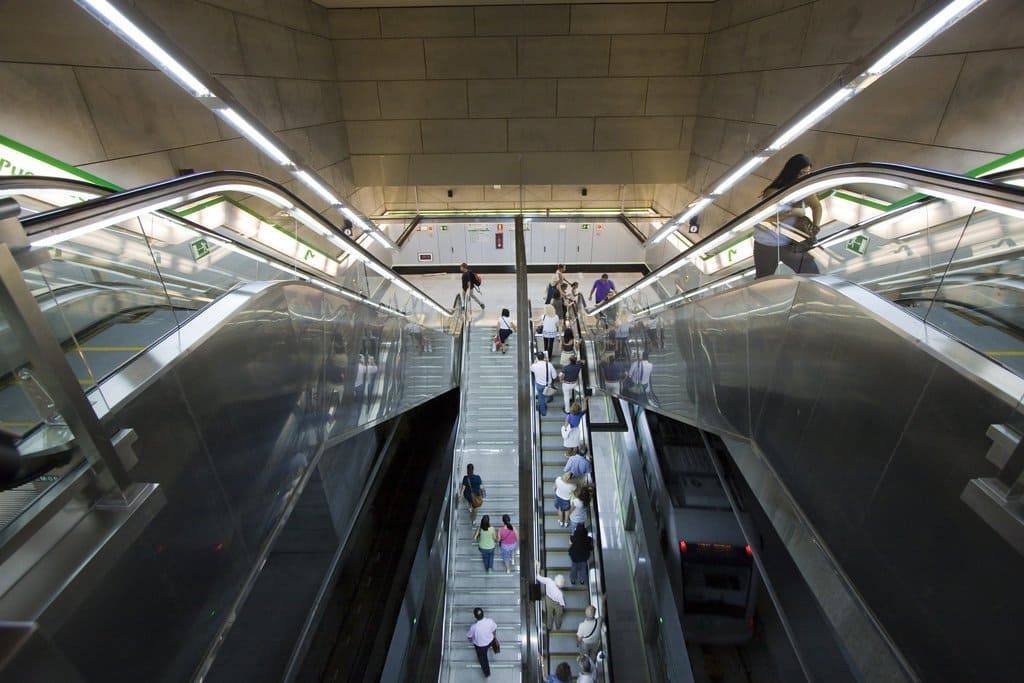 The Seville subway, was inaugurated in 2009. The Metro Sevilla network is the 5th in Spain in terms of kilometres and the number of people transported.

The network has currently one line although the City Hall is considering running major works to expand it. The initial project includes a total of 4 lines but the route of some of the lines has been very controversial and the works have been delayed.

The best and easiest way to use the Metro is with the help of a map.

As I just said, although the Seville Metro Plan has 4 lines in project and the city has more than 700,000 inhabitants (858,000 with the municipalities to which the Metro line reaches), it currently only has a single line divided into 3 sections.

Line 1 goes from Ciudad Expo to Olivar de Quintos, crossing Seville from west to east. It has 22 stations and it’s 18km long.

Ciudad Expo is located in the Aljarafe (an area of several suburbs on the hill beyond Triana). The subway passes through Los Remedios (Parque los Principes, Plaza Cuba), and south of the city center (Puerta Jerez, departure point for many buses lines, and Prado, where you catch the tram).

If you plan to do some daytrips towards the south of Seville, an interesting option is to get off at San Bernardo, which offers Cercanías train services.

The next station is Nervión, where the Sevilla FC stadium, called Ramón Sanchez Pizjuán, is located. It then continues east into residential areas.

In the city center, the line is subterranean whereas in the outskirts it becomes aerial.

These are the Sevilla Metro operating hours. They depend on the day of the week.

(*) Departure of the last train from the first and last station of the line.

Note: The operation hours shown above may change if there is a public holiday (fiesta). Check the extended operation hours either through the internet or with the Seville subway personnel. These extended hours apply mainly during the Semana Santa and the Feria de Abril.

Would you like to calculate your metro journey time?

As a general rule of thumb, estimate 3 minutes per stop. If you are connecting with other means of transport (e.g. a train like the Cercanías) you should increase your calculations by 10 minutes. Bear in mind that on Sundays, holidays and evenings the frequency is lower so add 7-8 minutes to your estimate.

Metro Sevilla sells tickets only using an e-wallet (monedero electrónico). There are several types of tickets.

It’s a digital card (usually the size of a credit card) that allows you to charge it with some credit. You can then pay your purchases by sliding the card along an electronic sensor that will register the transaction and will charge you from the credit of the e-wallet.

It allows you one trip per person within the Seville subway. Your e-wallet allows you a maximum of 9 single tickets recharge. Be careful, you can only recharge once.

If you are traveling in a group and to the same destination, the whole group can benefit from a one e-wallet. Once you have used all your single tickets don’t throw away your e-wallet: it can be used differently (see the BonoMetro section below).

Very similar to the single ticket. The only difference is that you can have a maximum recharge of 4 round trips.

A good option is recharging the e-wallet with a 1 day ticket that gives you an unlimited number of journeys for that particular day. It’s personal so no one else can use it but you. Again, once the e-wallet is used you can use it as a BonoMetro (see the BonoMetro section below).

This ticket has a minimum credit of 10€ and a maximum of 50€. And you can share it with your group members as well!

The main advantage is that it can be used on more than one means of transport and it will be counted as a single journey provided that your total journey is less than 2 hours.

A quick example will make things easier. Imagine that you take the Sevilla Metro and travel between Plaza de Cuba and San Bernardo. You then leave the metro and jump on a bus using the same ticket to finish your journey. But this is only valid as long as the total length of the journey is less than 2 hours. You could do it the other way round of course (first bus, then metro).

Now, be careful if you re-enter the Sevilla Metro once you have left it will count you as another journey.

It has a minimum credit of 10€ and a maximum of 50€. As for the Single and Return ticket, you can share it with your group members as long as you all go to the same station within the Metro Sevilla network.

With a Bono 45/30 you can make 45 identical trips within 30 days. This offers you a 20% discount compared to the BonoMetro and 44% discount to the single ticket.

It costs 30€ if you don’t plan to do any hops (keep reading, there’s an explanation below of what a hop is), 42€ for 1 hop and 50€ for 2 hops. This ticket is only valid at the Metro Sevilla network so you cannot combine it with other means of transport.

Each Seville subway ticket has a different fare

The journey fare is determined by the number of ‘hops’ (saltos) you’ll have to do between your origin and your destination. As you have imagined, a ‘hop’ is the passage from one tariff zone to another.

In the diagram below you can see that there are 3 tariff zones on Line 1.

Note: Fares are updated annually as of July 1st. So this information is valid only until then.

3 tips to save money and time

1. Try to have both coins and bank notes before purchasing your ticket. Some of the entrances have only automated ticket machines and even though they accept 5€, 10€ and 20€ notes, it’s better to have an alternative. These machines accept credit cards as well. Oh, and you can select to display the menus in Spanish, English, French and German…

2. If you plan to make more than 3-4 journeys, consider buying a Bono to save some money.