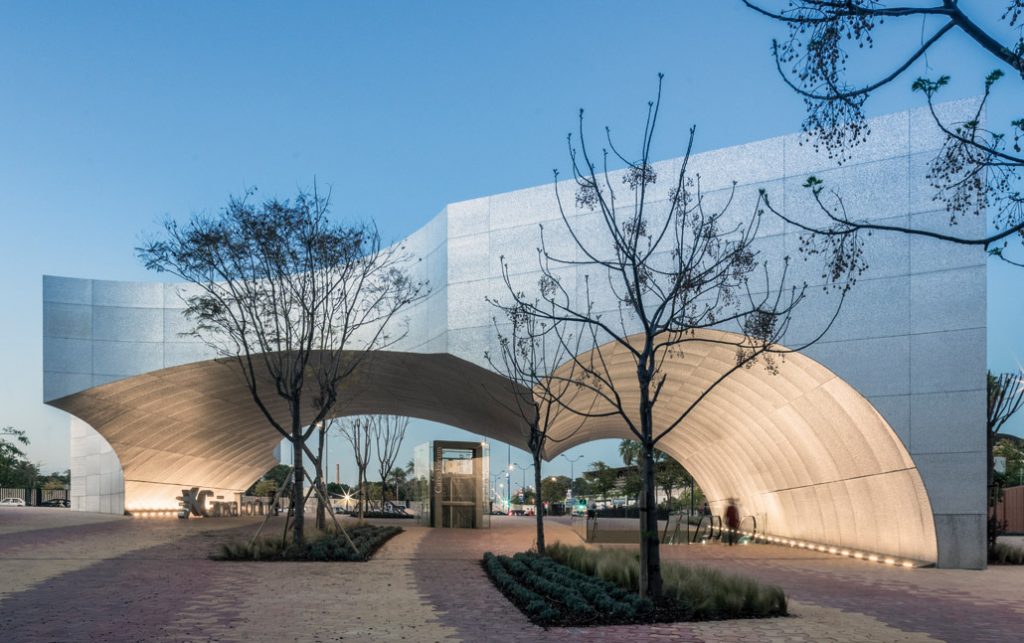 In the large shop you will find art, design and architecture books, unusual gifts, and creative kids toys and games.

4 keys to the CaixaForum Sevilla

Caixabank is one of Spain’s largest financial institutions and its foundation focuses primarily on public social issues as well as the arts and sciences, research and education.

The Fundación La Caixa has in recent years begun to invest in Spain’s cities by opening CaixaForum cultural centers (Barcelona, Madrid, Seville, Zaragoza, Palma, Girona, Lleida and Tarragona). The city of Seville opened the doors to its very own center on 2017 and there have been wonderful temporary exhibitions there ever since.

However, its construction and inauguration took a long time…

The initial project, which opening was planned in 2015, never took place.

Local, young and quite successful architect Guillermo Vázquez Consuegra won the competition to recovering and converting the Reales Atarazanas (Royal Shipyards) of Seville, a 13th century building situated in the heart of the Arenal district, into the new culture and social center CaixaForum Sevilla.

But it was abandoned after the Fundación La Caixa cited delays in the process caused by the City Hall and the regional government (Junta de Andalucía) as the reason for its change of heart.

Nevertheless, I’m sure that the reason is economical: in 2012 Caixabank had just bought Cajasol, the controversial 30-million € Torre Sevilla’s owner, the city’s tallest and controversial skyscrapper. So why would it want to invest 25 million € in restoring an old and abandoned building?

What to expect from the CaixaForum Sevilla

CaixaForum Seville offers a purpose-built venue for contemporary art exhibitions, concerts, conferences, and other events. Here you can enjoy a varied program of exhibitions and activities for all audiences throughout the year.

The family plans in Caixaforum are super elaborate thanks to its multiple activities: children’s film screenings, creative workshops, concerts and all kinds of shows.

If that’s not enough, it also has the EduCaixa program, which includes even more children’s workshops such as theater, drawing and much more.

Why you should visit the CaixaForum Sevilla

Seville’s Museo de Bellas Artes may get all the hype, but keep CaixaForum Sevilla on your radar.

The temporary exhibitions at CaixaForum Sevilla vary depending on their chronology (ancient, modern and contemporary art) and themes, going from plastic arts to science. Moreover, they are usually combined with other activities such as film and documentary screenings.

These activities and workshops aren’t pricey. So I recommend you check the availability in advance as they are usually in high demand.

Although three possible locations were initially put forward for the cultural space, the Torre Sevilla complex was eventually chosen.

CaixaForum Seville is housed in the old Pódium building foundations. The space has been divided into two exhibition rooms, an auditorium, two multi-purposes rooms, a shop and bookshop and a cafeteria.

The architect Guillermo Vázquez Consuegra devised a unique way to transform the space by creating a marquee, made from aluminum foam, through which you can access the Seville museum.

The curved canopy has a dual function: firstly, aesthetic, as it gives the building a modern look, and, secondly, functional, since it allows light to enter underground floors. Some interior designers compare the type of diffused light that filters through the canopy with the light that shines through the stained glass windows of Gothic cathedrals, such as the Seville’s own Cathedral.

Administrative offices and the restaurant are on the first floor, while the exhibition rooms and the auditorium are located on the lower ground floor. In other words, underneath the square that the museum opens out onto. This space was once the former car park and offices of the Pódium building. Much like in other CaixaForum buildings in Spain, former uses haven’t been hidden but rather made the most out of.