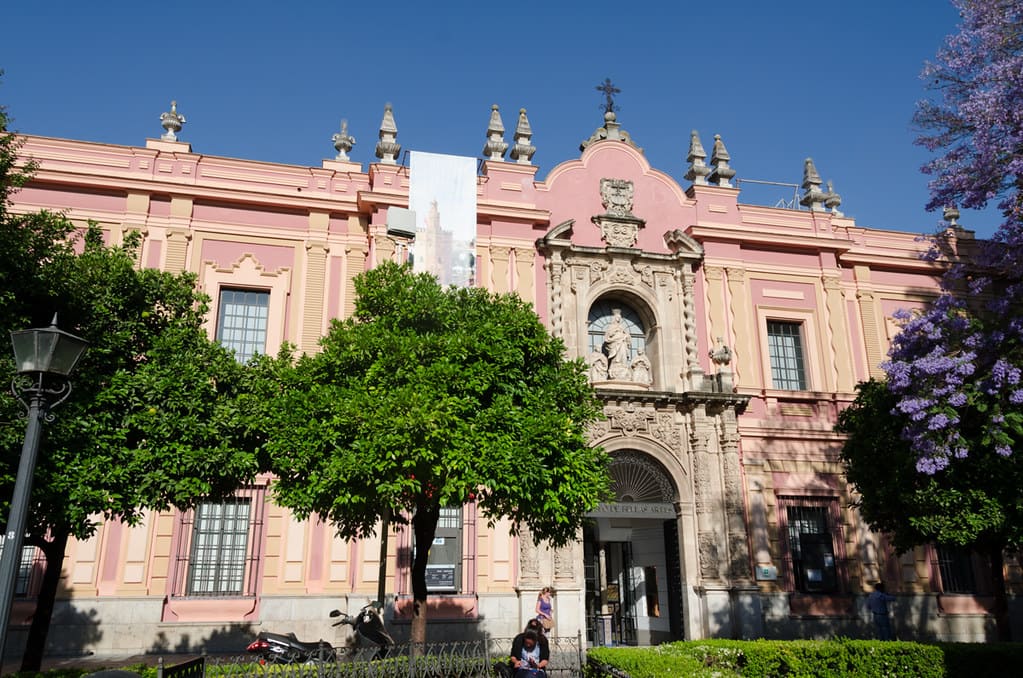 The Museo de Bellas Artes is one of the most important art museums in Spain, probably the second one after El Museo del Prado in Madrid. It exhibits the most famous paintings of the Seville School (15th to 17th centuries) featuring an impressive collection of works by Murillo, Valdés Leal, Zurbarán and El Greco among others.

7 keys to the Museo de Bellas Artes in Seville

Not only is the collection impressive, but the buildings and patio gardens are as well, so take a couple hours out of your visit to marvel at all the Museo de Bellas Artes has to offer.

In the 17th century, Spain underwent a spectacular flourishing in the arts, during the period known as the Siglo de Oro (Golden Century). And its best representation is the work of the Seville-born Diego de Silva y Velázquez. He is universally acknowledged as one of the greatest painters of all time.

This Seville museum was inaugurated in 1835 with hundreds of masterpieces coming from convents and monasteries plundered by the Mendizabal liberal government. The original building was a convent founded in some lots Fernando III donated to San Pedro Nolasco after conquering Seville from the Moors.

The original building that you can visit today dates from 1602. The works started with the church’s construction. It was finished in 1612, whereas the rest of the premises were concluded almost 50 years later.

What to expect from the Museo de Bellas Artes

The building is one of the best examples of the Andalusian Mannerist style. Juan de Oviedo was the architect and sculptor who conceived the construction project, promoted by Fray Alonso de Monroy. The façade preserves the structure of the old convent that once was. The building is structured around three patios communicated by a great staircase and the church, located at one end of the convent.

The museum is divided into 14 rooms distributed in chronological order. Most of the works are religious themed, while the most modern works are separated from them.

In the first rooms you’ll see Seville’s medieval jewels. One of the great attractions is Room 5, the old convent church, currently dedicated to Murillo and the great masters who preceded him in the first half of the 17th century. The set of paintings that he made for the Iglesia del Convento sevillano de Capuchinos is truly amazing and the most important work that you can see in the museum.

The typical Andalusian costumbrist paintings, with their cigar workers, bullfighting scenes, bandits and fairs are another great attraction of the museum. You’ll see this Andalusian paintings of the 19th and early 20th centuries in rooms 12, 13 and 14.

The Museo de Bellas Artes is filled with works of art, and many of them, like the Zurbarán’s Saint Hugh In The Refectory, are downright masterpieces. It’s difficult to select among all the pieces on display but here are some you shouldn’t miss.

Wow, this guided visit has everything! You’ll meet your English speaking guide at the Museo de Bellas Artes main entrance.

As an art historian, he will be very knowledgeable and will use his insight to bring the beautiful art alive. First, he will explain you the importance of the square (Plaza del Museo) and the history of the old convent that houses the museum today.

Later on, he will also explain you in detail the best the museum has to offer, and gives you insights into the classic Sevilian painters and other 17th Century artists. The exquisite masterpieces of Velázquez, Murillo, Francisco de Herrera the younger and Zurbarán among others are waiting for you.