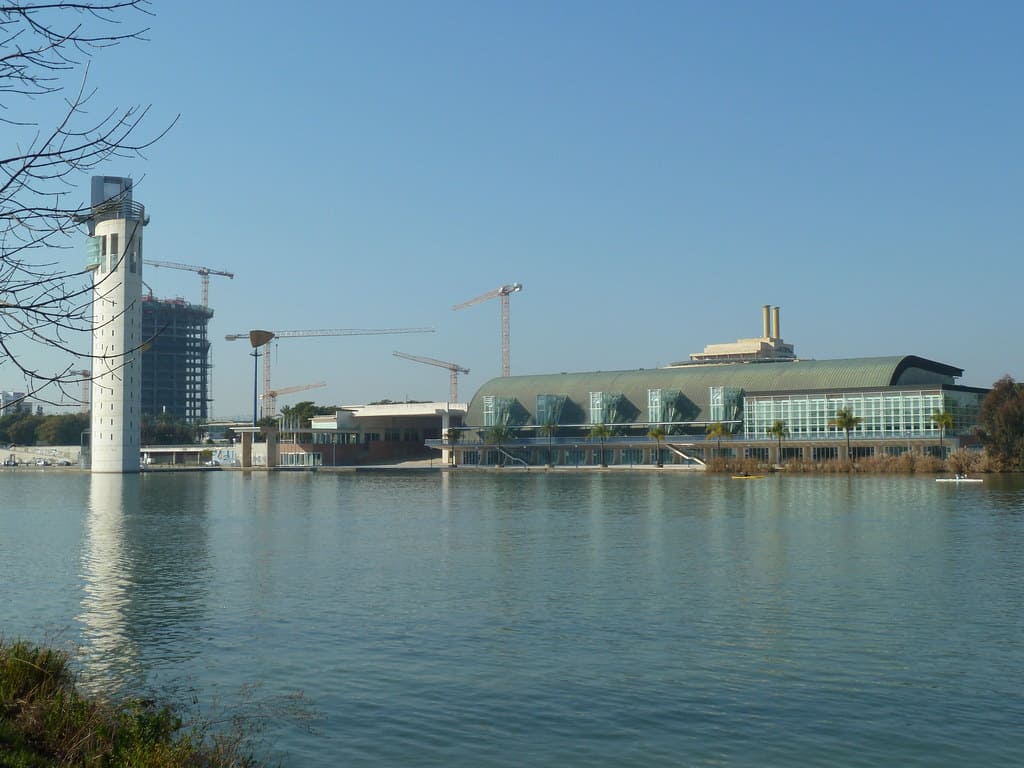 The Pabellón de la Navegación (or Navigation Pavilion in English), which was one of the flagships of Seville’s 1992 Universal Expo, is now completely reformed and reconverted into a beautiful museum.

3 keys to the Pabellón de la Navegación in Seville

During Expo’92 (Seville’s 1992 Universal Exposition), the Navigation Pavilion was the most visited attraction and voted best pavilion, drawing over two million visitors. Unfortunately, the premises – including this building, were left unused once the fair ended.

However, politicians sometimes do things right. After 12 years being closed and with a budget of more than 11 million €, it was finally decided to restore it. The Pabellón de la Navegación was reopened in January 2012.

Today it’s a museum devoted to Seville’s relationship with water.

Why is water so important to the city? First of all because Seville is one of the few cities in Spain where the river is navigable. Also, because in the times of the Spanish Empire (15th and 16th centuries), all wealth and treasures from the American colonies were held here.

What to expect from the Pabellón de la Navegación

Four exhibition areas occupy the continuous space of the Navigation Pavilion’s upper level. Once you enter it, you will have the sensation to be inside a massive wooden hull.

As soon as your eyes adjust to the semi-darkness, you will find yourself suddenly transported to the sea — a 14,500-LED light surface that creates a sea rippling beneath projected tempestuous skies. You will be stepping aboard a timber deck to embark upon an Atlantic Ocean crossing.

You can interact with maritime props that activate short films reviving life-sized animated historical voyagers who speak in different languages about life at sea and the personal motivations behind their migrations. You can also touch reproductions of their possessions. And the sound of passing storms and the smell of tobacco complete the sensorial journey.

Area #2: Navigation, its science and technology

After emerging from the sea you will see an enormous blue mural, a masterpiece of Mexican artist Gabriel Pacheco, where you can see real objects. It shows the navigation history, which is also illustrated by the old ships scale models displayed next to it.

In this room, six naval models from the Expo’92 collection are exhibited, which are representative of different periods of naval history.

The best way to understand navigation is to experience a boat trip. Welcome to the Sailors School, a virtual academy to learn and practice the maneuvers that are practiced on ships when they sail on the high seas.

What would you like to be: captain, sailor or cabin boy? You’ll have to be in charge of handling the rudder, the sails, the bilge pump, the gun and other elements of the ship.

In this interactive room with a 22-meter wide screen, and elements reproduced to natural size, you’ll be practicing in three scenarios: the arrival to a harbor, navigating during a storm and the attack of the corsairs.

Finally, the last room is named ‘Historical views of Seville’ where two interactive screens will help you understand the city’s evolution along the centuries, using the Guadalquivir river and the navigation as the main subjects. Tactile screens illustrate the same viewpoint changing through the centuries demonstrating the evolving relationship between the city, its people and the Guadalquivir River.

Before departing the museum, I encourage you to ascend a separate tower inherited from Expo’92 offering a bird’s-eye city and river views. The way up is by external glass lifts while the descent is via an internal ramp, the latter inspired by the Giralda – Seville Cathedral’s Moorish bell tower.

Why you should visit the Pabellón de la Navegación

The target audience of this museum is mainly children. If you want to introduce them to the thrilling universe of pirates and sea exploration, many of the displays will give them hints of what was to be on a ship crossing the Atlantic on their way to America. The cartoon videos at the first room are particularly interesting.

From an architectural point of view the building itself is sublime. The Pabellón de la Navegación was one of the main highlights during the Expo’92 and it’s easy to see why. Actually, if you are into modern architecture, you may want to have a closer look at it, for free! Go to the opposite river bank and enjoy the view!

Moreover, the views of the city from the Schindler Tower are excellent and offer an impressive panorama of the Guadalquivir river. The perspective of the city center is also very nice. To reach the top you need to take the elevator whereas to return you have to walk down the ramps.