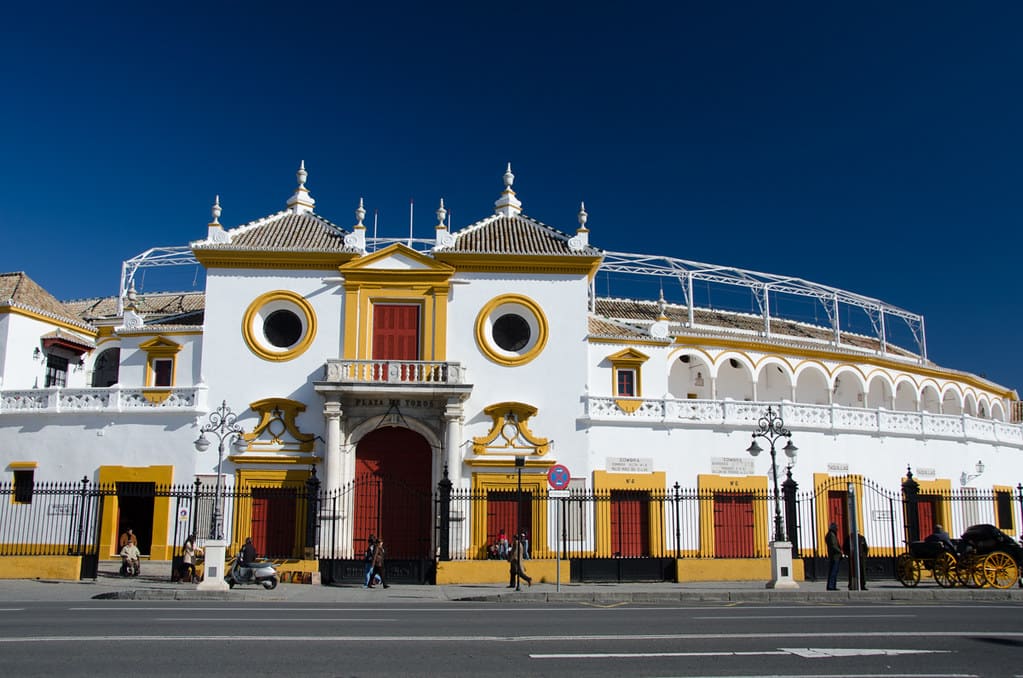 The Seville bullfighting ring (plaza de toros) is called the Plaza de Toros de la Real Maestranza de Caballería de Sevilla, but it is popularly known as La Maestranza. It is the most ancient bullring in Spain.

The bullfighting season starts by the end of March and ends by the end of September. The most important event is the Feria de Abril, during which a bullfight takes place every day, for almost two weeks and generally in April. Tickets are sold out almost every day, so book your tickets as soon as possible.

La Maestranza is considered the mecca of bullfighting, not only because of its history and tradition, but also because the public is considered one of the most expert and unforgiving of the world.

The Seville bullring is for sure one of the most visited attractions in the city and it is a not to miss if you want to know more about bulls, toreros and the Spanish fiesta in an amazing site.

How to get to the Sevilla bullfighting ring

La Maestranza bullring at the far west of the city center, overlooking the river Guadalquivir. The exact address is Paseo de Colón, 12.

There are many options that you can use to get there on time.

This is, by far, my preferred option:

You should definitely not drive on your own to get to La Maestranza.

There are a number of reasons for this recommendation:

If you decide to drive, chances are you will get late to La Maestranza. And you won’t be allowed to access the tendido (seating section) once the first bull has entered the arena.

You access to La Maestranza depends on what you plan to do:

If you want to do the Seville bullfighting ring tour

This 1-hour audio-guided tour through the Plaza de Toros de la Maestranza takes you around the building’s emblematic areas.

Usually the meeting point is at the main gate of the bullfighting museum, next to La Maestranza main gate, also known as Puerta del Príncipa, located at Paseo de Colón, 12.

You can only access the Seville bullfighting ring tour through the Museo Taurino (Bullfighting Museum).

If you are attending a bullfight

The first thing you need to do is to locate your entrance gate. This information is on your ticket, but here is a summary:

Once inside, look for the information signs to get to your seat. The numbers of the tendidos are written above the gateways in the passageway:

Now, navigate throughout the corridors until you find the inside gate (named “puerta” on your Seville bullfight ticket) leading to the bullring section (tendillo) where your seat is.

Finally, now that you are in the grandstands, look for your row (or “fila“) and your seat number (“número” or “nº“).

La Maestranza construction started in 1730 although it was initially square-shaped! I let you imagine how dangerous this was. Fortunately, in 1733 the Corporation decided to build a circular bullring, part in stone and part in wood.

Over the years a lot of elements were added. One of them is the Prince’s box (Palco del Príncipe) completed in 1765 and built for Felipe de Borbón, heir and son of Felipe V and Isabel Farnesio, and the first Royal principal of the Corporation. Another one is the Prince’s Gate (Puerta del Principe), the most important of La Maestranza in spite of not being the main one, because it is the torero‘s exit if he has succeeded in the fight.

In 1768, Carlos III forbade bullfights and the construction was stopped. In 1881 the bullring was finally completed, with the whole structure in stone and all the wooden parts removed.

Finally, in 1914-15 the architect Aníbal González, the same that designed the Plaza de España, changed the stone structure for a brick one and practically rebuilt the whole bullring including modifications and renovations. The final result is what you can see today.

The Real Maestranza de Caballería is a cavalry and noble corporation founded in 1670. Its members belong to old noble families.

Between 1729 and 1733 Felipe V stayed in Seville and received support from the Corporation in spite of being French and the first Bourbon king of Spain. To express his gratitude, the King granted important privileges to the Corporation, including the Royal treatment (Real in Spanish). Furthermore, the principal of the Royal Corporation would be one of his sons, Felipe.

From Fernando VII (who reigned from 1808 to 1833) on, the principal is the King himself and today the current King of Spain, Felipe VI, has this title.

Since its foundation, the Corporation organized public events promoting horse shows. And in 1730 it received the privilege to hold bullfights. From that moment the shows included bulls for both training the riders and entertaining the spectators. Can you imagine? At that time Spanish bullfights were a military training!

Currently, the Corporation still supports riding and bullfighting activities, especially the Feria de Abril. During that time Spanish bullfights are hold for a period of 16-18 days in April, one per day.

The first element you will surely notice is the famous Puerta del Príncipe (Prince’s Gate in English). Going out through this door, especially during the Feria de Abril, is every bullfighter’s ambition.

The chains located at the top of the Puerta del Príncipe have been there since 1796 and symbolize the fact that once you enter the bullring you are under Royal protection.

Did you know that the bullring is the place where Carmen, the main character of the Mérimée book (later on becoming a Bizet’s opera), is stabbed to death by her husband Don José? They initially met at the Tobacco Factory and fell in love… but you know that a drama always ends up with a tragic death.

The exterior of La Maestranza bullring features various statues and sculptures dedicated to prominent figures in the world of bullfighting, such as Curro Romero and Pepe Luis Vázquez.

The Museo Taurino (Bullfighting Museum) consists of a series of indoor galleries where prints, paintings and objects linked to the bullfighting world are displayed.

However, the highlight is the last part of the tour: the Bullfighters’ Chapel. This silent space is presided by an altarpiece featuring a small image of the Virgen de Los Dolores in the middle, and it is the last place where bullfighters go before entering the ring.

You will also visit the front row of the bullring, the Exhibition hall, and the horse stables.