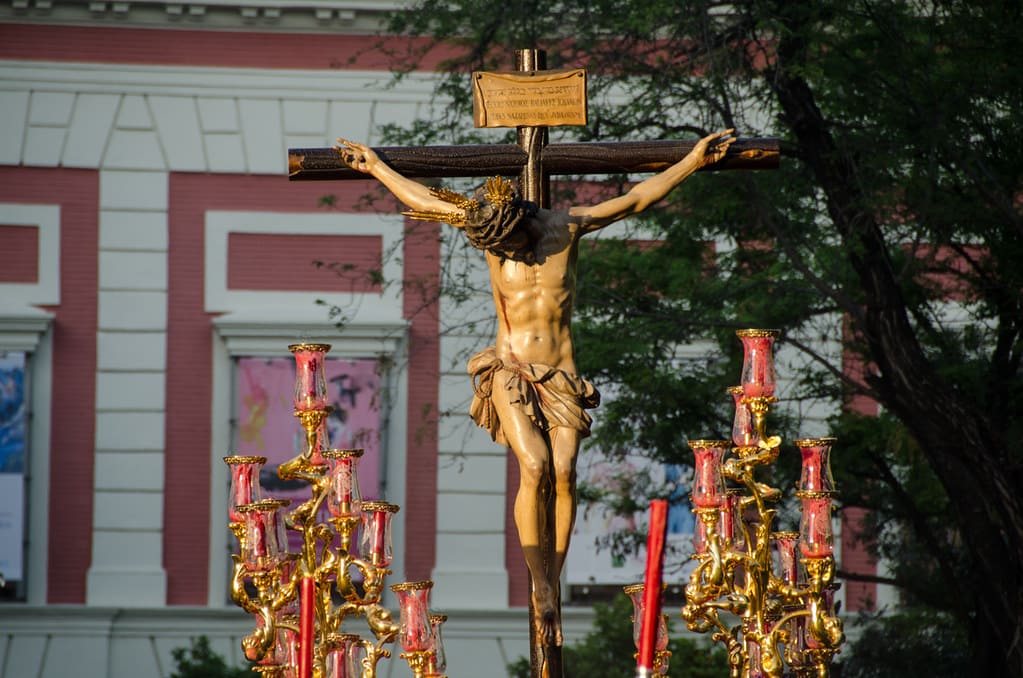 In Sevilla, Semana Santa is the most important event of the year for the hermandades and cofradias (brotherhoods). During the rest of the year they work and prepare the processions that will take place during the Holy Week. But they also carry on other religious activities.

What is an hermandad?

An hermandad is an association whose members are Catholic laypersons. It can also be known as cofradia de penitencia (penance brotherhood). Their main purpose is to organize and perform public religious acts.

The main member of the cofradia is the hermano mayor (elder), representing it at every official event.

In Sevilla, Semana Santa processions are the heart of brotherhoods as they represent the main event of Christ’s life (His Death and Resurrection). They are also the best occasion to prove their faith as well as achieve public penance. Consequently, every member of the hermandad is actually performing penance during the procession.

Even though the main subject and the feelings processions inspire have to do with grief, sadness, mourning, repentance and devotion, they are absolutely spectacular. You shouldn’t miss these astonishing celebrations.

Apart from these, brotherhoods carry on other activities throughout the year such as minor processions as well as charity actions and works for the community.

Membership is open to any baptized person. However, each brotherhood has its own internal rules deciding:

It’s very frequent among Sevillanos to belong to one (or more) brotherhoods.

If you ask them what drove them to pick this or that hermandad, you’ll get multiple answers. Some follow a family tradition while others identify themselves with the neighborhood one or just choose according to their personal preference.

In Sevilla, Semana Santa is perfectly coordinated and organized

Up to 60 brotherhoods process from their own chapel or the church they are attached to the Cathedral and return back. Besides, 9 more hermandades and cofradias process on the Friday and Saturday before Palm Sunday.

Just to give you an idea of how many people can be involved, the number of nazarenos can go from 100 (Santo Entierro) to over 3,000 (La Macarena)… And this represents only part of the people involved in the procesion!

Add to this lots of Sevillanos showing devotion for their Cristo or Virgen, outsiders coming from far away to enjoy the Holy Week and other curious people – among whose you’ll find me, and the hordes walking in the narrow streets of the city centre can be phenomenal!

As you can imagine, such an event needs to be carefully planned and scheduled. Every brotherhood deserves its own place and prominence. For this reason, the Consejo Superior de Hermandades y Cofradias (Supreme Council of Brotherhoods) was founded in 1930.

The Council plays a double role:

Members of the Council are elected every four years among the hermanos mayores (elders).

The processions’ order and schedule

The processions‘ order has been historically determined according to a set of rules of precedence, tradition, canonical needs, agreements between brotherhoods and logistical considerations.

As a consequence, most hermandades don’t process in chronological order. There are a few exceptions though, such as La Borriquita (The Little She-Donkey, depicting Christ’s triumphal entry into Jerusalem), La Cena (The Last Supper) and El Santo Entierro (Holy Burial).

The cofradias need also to respect a very strict schedule referring to the entrance of each one of them at the Carrera Oficial and the Cathedral. Otherwise, they would step on each other and without any priority the Sevilla Semana Santa would be a chaos.

Therefore, you’ll soon realize that a map and a daily schedule of the processions are essential. With the schedule, you’ll have a list of the approximate times when you can see the processions at a particular point.

Additionally, you should plan your holiday knowing the Semana Santa dates in advance.

And if you feel overwhelmed, follow some useful hints as well as advice on what to see!