The Plaza de Espana in Seville 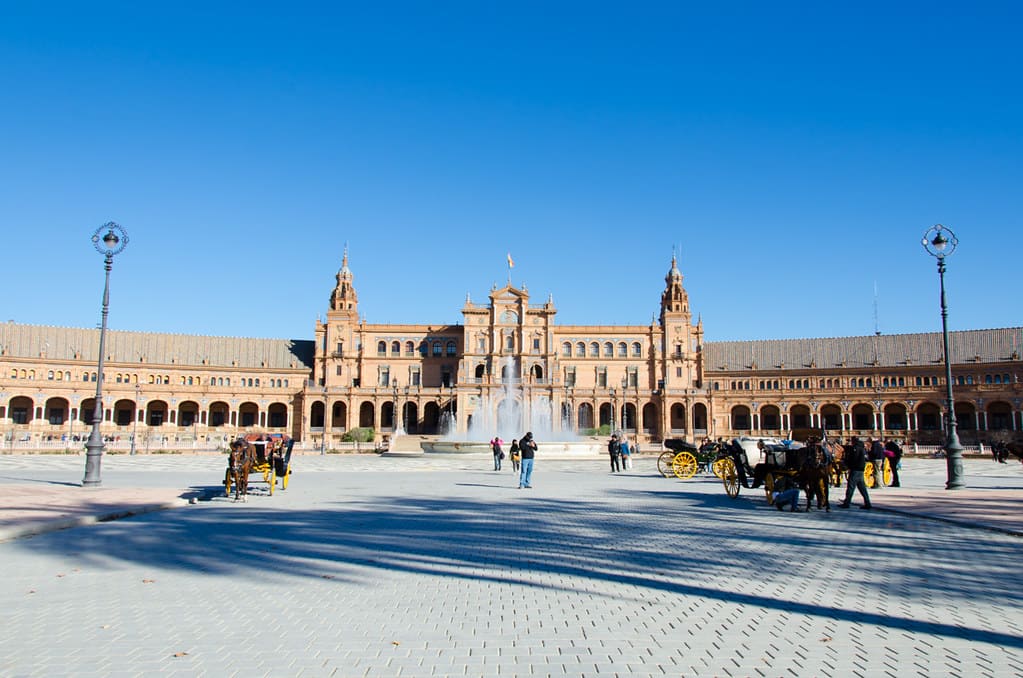 The Plaza de Espana or Spain Square is correctly spelled as Plaza de España (with an Ñ, a peculiar letter we have in Spanish). This exuberant and magnificent place is located in María Luisa Park. It was one of the main constructions and symbols of the Ibero-American Exposition World’s Fair that took place in Seville in 1929.

Nowadays, it remains a magical place with a style that recreates de Arab constructions of 10 centuries ago and that emphasizes the regions of Spain and its union with America.

Although it is quite easy to find it because of its huge size, the Plaza de Espana is located near the entrance of the Park that is just in front of the University of Seville. From the Puerta de Jerez, walk along the University until you reach a big square with a statue of the Cid Campeador on his horse. Cross the square and enter the Park following the Avenida de Isabel la Católica. The Plaza de Espana is 5 minutes walking ahead on your left hand side.

You can get there after a nice stroll across the city center. Or you can do something unique – a ride in a horse-drawn carriage from the Plaza de San Francisco and the Cathedral to the Plaza de Espana and the Parque de María Luisa. The carriage travels at a slow trot while you sit back and relax. Nobody will believe you did this!

Origins of the Plaza de España

The Plaza de Espana was originally designed and built as the ultimate symbol and the most ambitious project of the 1929 Ibero-American Exposition World’s Fair. The initial idea of holding a World Fair in Seville was promoted in 1909 with the aim of opening the city and, especially, to modernize it. It would be the perfect occasion to achieve civil works, thus improve employment, promote the tourism, enhance the image of Seville and strengthen relationships with American countries.

The works of the Plaza de Espana began in 1914 and where supervised by its creator, the Sevillian architect Aníbal González. He was also the architect chief of the event and designed other buildings such as the Mudejar Pavilion (better known today as the Museo de Artes y Costumbres), the Fine Arts Pavilion (transformed later in the Archaeological Museum) and the Royal Pavilion. All of them can be found in the María Luisa Park, at the America Square (Plaza de América).

It was the most expensive and hard construction of the fair, employing at some point more than 1,000 workers. Obviously, the project went through aesthetical critics and financial difficulties, especially because Seville was in very bad economic shape.

In 1926 Aníbal González resigned from his position and the Plaza de Espana was finished in 1928 by Vicente Taverner, who added the central fountain. It was also the place where Alfonso XIII inaugurated the Fair.

What can you see in Seville in two hours and a few miles? Pretty much everything, if you’re on the Electric Bike Tour Of Seville. This energizing, fun cycling tour will take you to La Maestranza, the Hotel Alfonso XIII, Triana and of course the Plaza de España. Once you see its dimensions you’ll be happy to be in a bike!

Seville is completely flat, which makes a bike tour the perfect way to travel from sight to sight at a relaxed pace. And with knowledgeable and friendly guides you get to see the best that the city has to offer.

More information about the Electric Bike Tour of Seville »

An unconventional design full of symbolism

The Plaza de Espana is huge. With a half-elliptic shape and almost 200 m (656 ft) of diameter, it has 50,000 square m (538,196 square ft) of which 19,000 m (204,514 square ft) are occupied by the main building and its two towers. The shape represents the embrace of Spain and its ancient colonies and it is orientated facing the Gualdalquivir River as a path to America.

The square is surrounded by a large 515 m long canal (1,690 ft) that is crossed by four bridges, each one representing the four ancient kingdoms of Spain (Castile, León, Aragón and Navarra). The complex has a balanced structure of a central building with long arms that end in two towers, named South Tower and North Tower. This idea was inspired by the 16th century Italian architect Andrea Palladio whom Aníbal González studied deeply and admired.

There is a series of 48 tiled alcoves or benches, each representing a Spanish province. A province is a political division of each region, called Autonomous Community (Comunidad Autonoma). The latest are the equivalent of a state in the US and Australia or a Lander in Germany, for example. The benches are ordered alphabetically and each one has the name, coat of arms, map and some historical facts. In spite of the state of some of the tiles, they are absolutely spectacular for their artistic value and their representations of the history of Spain. It’s a ceramic encyclopaedia!

The materials used are typically Spanish: the red bricks, the ceramics and tiles, the marble works and the forged iron decorations. His intention was to mix the Art Déco style, in fashion at the time, with the classic Mudejar style, inherited from the Arabs (as you can see at the Alcázar and at the Casa de Pilatos). Finally, the two towers are mainly from the Baroque and were very much criticized back then because they are almost as high (74 m or 243 ft) as the Giralda tower (97.5 m or 320 ft).

Finally, the central fountain is said to break the emptiness of the square. Some suggested removing it. I like it! So I’m glad no one touched it.

After more than 2 years under restoration, the Plaza de Espana was inaugurated in October, 2010. Before the works, its original shape was badly deteriorated because abandonment and vandalism. Some people visiting the square had the funny idea of taking home a souvenir and used to rip off part of the tiles or other ceramic ornaments.

The City Council with the help of State funds undertook a project to recover the image the Square had in 1929. The lightning, in particular 20 ceramic streetlights, the paving and the water systemare the main innovations. On top of it, a water treatment station was built, allowing a few small boats at the Square’s canal.

Don’t miss these must see spots