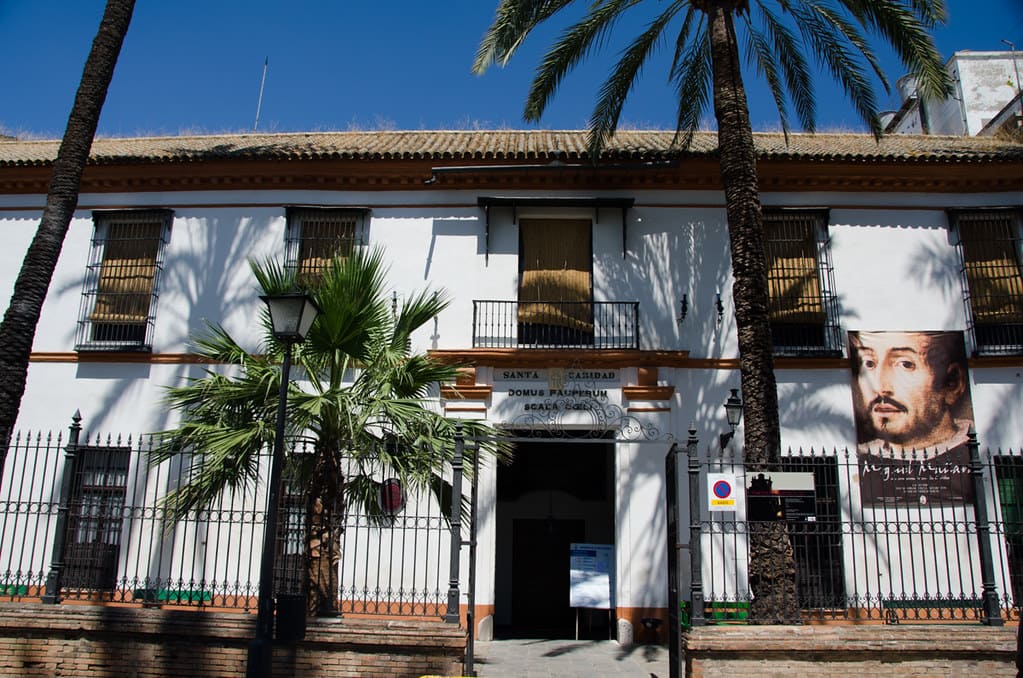 The Charity Hospital is the main building of the Charity Brotherhood (Hermandad de la Caridad). It is located in the center of Seville, next to the atarazanas and just a short walk from the Torre del Oro and the Maestranza bullring.

Nowadays a large part of the premises are still used as a hospital, since the Brotherhood is involved in several charities and other projects to help people. The entrance is one of the few ways the Brotherhood has to fund such programs. The Charity Hospital should definitely be on your top list of sights to visit while you are here – it is one of the finest examples of Baroque architecture and art of the 17th century.

The entrance will give you access to the central courtyard, the church and a lateral patio.

Additionally, if there is a temporary exhibition, you’ll also have the chance to visit it. It is located in the Sala Baja de Cabildos (lower meeting room) where you’ll also see belongings of Miguel Mañara, the most important principal of the Brotherhood.

Please note that this is a not only an operational hospital but also a place of worship for the Brotherhood thus, the opening hours can vary as deemed appropriate. The only public mass in the Hospital church is on Sundays at 12:30. The rest of the masses are private.

Origins of the brotherhood

The Charity Brotherhood was founded in the 15th century and its mission was, and still is, to assist sick abandoned people and to bury executed and drowned people, as well as pray for their souls. Initially their seat was at one of the Royal Atarazanas, where they had a chapel devoted to Saint George (San Jorge).

At the beginning of the 16th century, the atarazanas were not used as dry docks anymore. At the time, they didn’t have a precise function anymore and, in order to preserve them, five sheds were handed over to the Charity Brotherhood. As a result, three big rooms were built for the Charity Hospital. In 1644 the chapel was almost in ruins and a new one was designed.

In 1662, Miguel Mañara entered the Brotherhood. One year later, he was elected Hermano Mayor (principal of the Brotherhood). By 1664 Mañara was totally devoted to the construction of the new church and to the institution, transforming it into one of the most important organizations in Seville.

The building has not changed much since the 17th century. The Charity Hospital is set up around two twin patios. At the center of each one there is a fountain, one with a statue of the Charity and the other of the Mercy, elaborated in Genoa in 1682.

If you pay attention you’ll notice that these courtyards are typical patios sevillanos, more austere and sober though. They have the same structure that you can also see at the Casa de Pilatos or the Palacio de Lebrija. All inherited from the Arabs… (you can also admire some excellent examples at the Alcázar).

On top of it, the patio is decorated with seven tiled panels of 1700 from Holland, representing scenes of the Old and New Testament. Absolutely marvelous!

The church’s façade is impressive and very original. It is decorated with five blue and white tiled panels. Each one represents Saint George, Saint James (Santiago), Faith, Hope and Charity. If you didn’t notice them before entering the Hospital, save some time to do so when you exit the building.

Inside, the church is magnificent. All the decoration was planned by Mañara. It is one of the most beautiful churches in Seville and, by far, my favorite one (followed by the church of the Hospital de los Venerables).

Mañara had also the idea of decorating the church with paintings that would illustrate his ideals: the rejection of the mundane vanities and the exaltation of the mercy acts. These art pieces were commissioned to very important painters such as Bartolomé Esteban Murillo, Juan de Valdés Leal and sculptors like Pedro Roldán and Bernardo Simón de Pineda.

The altarpiece by Simón de Pineda is completely Baroque, very elaborated and covered in gold. The great sculpture represents Christ’s Burial, referring to the mission of the Brotherhood (bury the executed and the drowned). It was done by Roldán and colored by Valdés Leal.

Murillo painted six masterpieces about mercy. Unfortunately, four of them were stolen in 1810 by the French marshal Soult. When he died, his heirs sold the paintings and they can be found today in the most important museums around the world…

Still, the church preserves much of its original aspect and the remaining paintings, spread all over the nave, are awesome.

Exiting the main courtyard by a tiny door next to the church side, you reach a smaller patio. There are three curious elements there.

The first one is that you get a perfect view of one of the atarazanas‘ arch. It proves that this old Middle Age structure serves as foundation for the Charity Hospital.

The second one is a ceramic sign, precisely at the arch (leave the well behind you). It clearly indicates the date of the atarazanas construction and its use as a foundation.

Finally, there are eight rosebushes around the bust of Miguel Mañara. They are said to be planted by Mañara himself because he brought them from his own house when he entered the Brotherhood.

Mañara asked to be buried outside the church as a sign of humility. Actually, his last wish is written over his tomb. Other principals followed this idea and today the access to the church is completely covered with burial sites. It is almost impossible not to walk on them.

Start the visit at the main courtyard. In fact, it is the first thing you see after crossing the main gate of the Charity Hospital. Go to the corner in front of you to have a beautiful perspective. Then, walk around to admire the Dutch ceramic panels, while listening to the water pouring from the fountains.

It is very relaxing, especially because the place is very quiet. And the contrast of the yellow frame at the walls and the blue tiles with the white color dominating the rest is lovely.

After that, go to the Sala Baja de los Cabildos. It’s not exceptional but you can check the temporary exhibition if there is one.

Once you are done, walk to the patio opposite to the church entrance. It’s cool to check the atarazanas‘ arches!

Finally, go to the church and hold your breath. Take your time to walk around the paintings and get close to the altarpiece. The central sculpture is absolutely astonishing, you have the impression that the characters are alive. Finally, sit at one of the benches, it’s a great place to rest your feet for a while and look at the church as a whole.