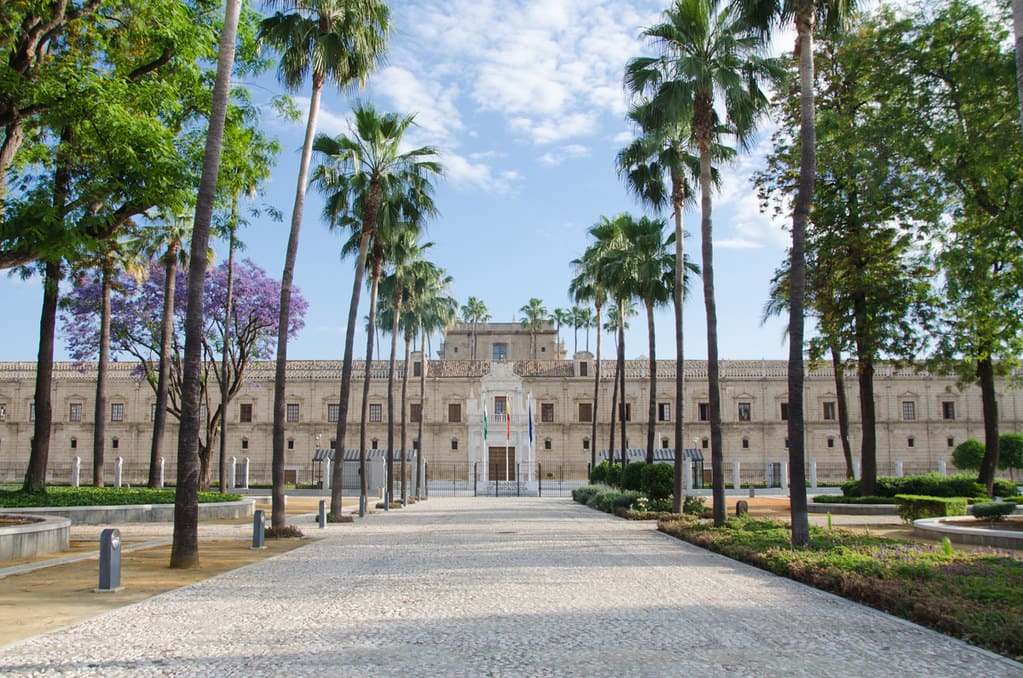 The city of Sevilla is among the most visited ones in Spain. It is a very special place, with magnificent and idyllic aesthetics that will make you feel its glamour and exotism.

The usual travel circuits include impressive sights such as the Seville Cathedral and, of course, its famous Giralda tower.

Yet the city of Sevilla is also full of charming lanes, little known squares and curious monuments. Visitors generally skip them because they are not included in the regular itineraries or in some popular travel guides…

Discover what others are missing and find some hidden gems!

This small but gracious building is towards the Parque de Maria Luisa and in front of the Remedios Bridge that crosses the Gualdaquivir river.

Its name literally means the Queen’s Sewing Room. Some popular legend concludes that it was used by Queen María de las Mercedes (wife of Alfonso XII) to sew and enjoy the river’s open air as she was ill and couldn’t spend much time outside.

However, the Costurero was built in 1893 and the Queen died in 1878… Judge for yourself!

It is now used as a city of Sevilla tourist information office. Clearly not the most convenient location (you have seven all over Seville, including one at the airport and one at the train station) but it can be helpful if you are walking from the Plaza de España or the Royal Tobacco Factory.

The city of Sevilla was surrounded by walls from the times of the Roman Empire. During the Moorish invasion, and especially over the Almoravide period, the Arabs expanded the walls and included further fortifications and towers such as the Torre del Oro.

In fact, in the 13th century Seville was completely enclosed to protect it from the Christians attacks. The walls were 7 km (4.3 mi) long and had 166 towers, 13 gates and 6 postigos (gates that are not a main entrance to the city).

They were almost untouched until the Revolution of 1868. It was decided then that the walls should be demolished to expand the city boundaries (too bad, I love walled cities…).

Today, only a few stretches are still there and the best place to admire them is next to the Macarena Church, where you’ll also see the Macarena Gate and can walk along them to get
to the Carmona Gate… although after a 10 minute walk the walls disappear, until you get to the Jardines del Valle (Valley Gardens) where you can see some small streches.

The walls were also used as a customs barrier and some places have kept the name of the original gates like the Puerta de la Carne (meat), Postigo del Jabón (soap), Postigo del Carbón (coal) and Postigo de la Feria (fair) also known as Postigo de la Basura (trash). The last one is a funny and weird name, huh?

Fortunately, the Postigo del Aceite (oil) is still there…

Although the Macarena Gate is beautiful especially for its surroundings (the walls and the Andalusian Parliament in front of it), the Postigo del Aceite or Oil’s Gate is the most famous entrance to the city of Sevilla. Also known as El Postigo to most sevillanos, the gate was originally built in 1107 by the Arabs and was renovated in 1573.

In 1252 King Alfonso X ordered the construction of the atarazanas (word of Arab origin meaning shipyard) where ships were assembled. The atarazanas were built next to the gate, named at the time Puerta de Barcos (ships).

NOTE: The Atarazanas cannot be visited at the moment.

The atarazanas were built in the 13th century next to the Postigo and the Gualdalquivir River to facilitate the access to the river and the trade goods. They were used as dry docks until the 15th century because the ship structures became too big and there was not enough room to assemble them properly.

From there on, the atarazanas became a storage depot, a municipal market (lonja) and were even used for military purposes. Later on, in the 17th century, five sheds were renovated and transformed into the Hospital de la Caridad (Charity Hospital), home of the Hermandad de la Santa Caridad (Saint Charity Brotherhood).

Finally, in 1993 the Regional Government (Junta de Andalucia) bought the remaining sheds to the Ministry of Defense and restored them to end up the way you can see them today.

The Torre de la Plata was part of the city of Sevilla walls and was linked to the Torre del Oro. It is one of the remaining towers of the original Arabic walls and was built in the 13th century.

Unfortunately the tower cannot be visited… and even though it has been restored it used to be an improvised shelter for homeless people.

Nowadays, it is surrounded by a private car parking and you can only have a clear view of the tower if you cross the entrance barrier.

The only way to visit the Andalucia Parliament is with a guided visit (only in Spanish).

NOTE: To visit the Parliament you must fill book it online. Again, it is only in Spanish, and it lasts one hour approximately.

The city of Sevilla is home of the Andalucia Parliament. This building, also known as the Hospital de las Cinco Llagas (Hospital of the Five Wounds), is just opposite the Macarena Church and the ancient city walls.

Designed and constructed between 1546 and 1558, it was used as a hospital until 1972 and it was then abandoned. In 1986 the building was almost in ruins and the Junta de Andalucia started the restoration works to finally inaugurate it in February 28th, 1992 the day of Andalucia.

NOTE: The Seville City Hall cannot be visited at the moment.

Book your guided visit (only in Spanish)

The City Hall is located between the Plaza Nueva and the Plaza de San Francisco. It was built in 1527 after the wedding of Carlos I of Spain and V of Germany with his cousin Isabel of Portugal. The King decided that the City Council needed a venue that would represent the power and importance of the city of Sevilla.

The original building is a fine example of the Renaissance style of the 16th century and can be observed from the Plaza de San Francisco. This façade has many reliefs and symbols representing Hercules, Julius Caesar and Emperor Carlos V, all linked historically to the city.

In the 19th century the monastery of San Francisco that was next to the City Hall was demolished and restoration works took place on the other façade, the one seen from the Plaza Nueva. The style is neoclassic and the interior was organized around two patios and a big staircase.

Would you like to read about the best monuments in Seville…

… or look for great highlights that are excluded from the tourist circuits?