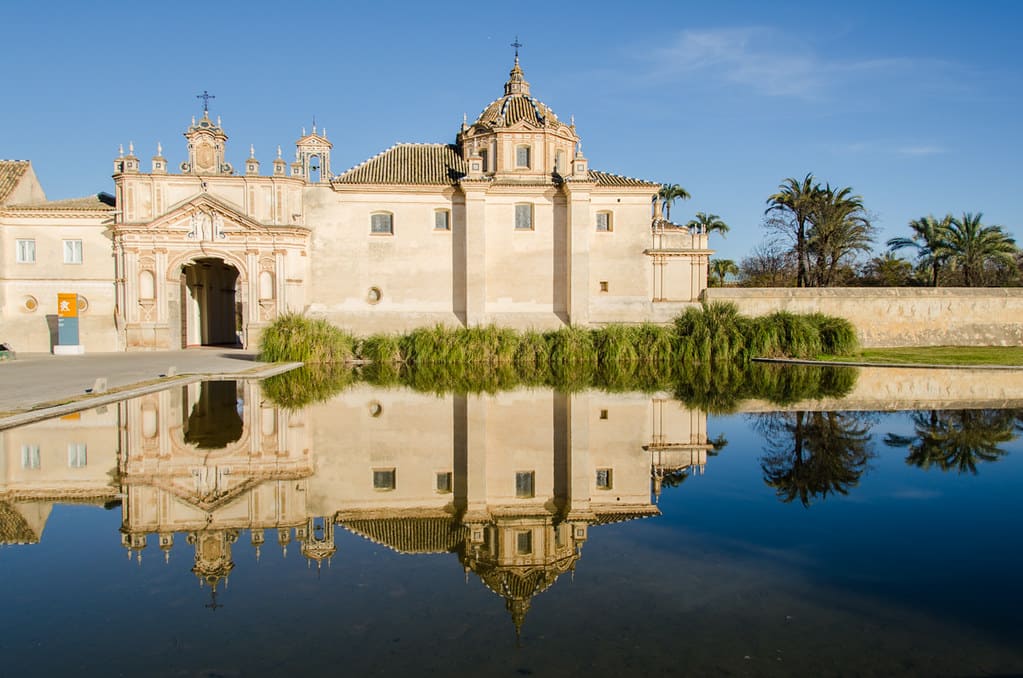 The CAAC (Centro Andaluz de Arte Contemporáneo) stands out for being the city’s museum of modern art. It offers both modern Spanish and international art from a permanent collection as well as temporary exhibitions.

7 keys to the CAAC in Seville

As you walk up to the CAAC, you might wonder if you’re at the right place. The view of the former Monastery of the Cartuja is hardly the space you would expect to find some of the most contemporary art pieces in Andalucía…

According to a popular legend, the Cartuja Island had scattered caves made by potters for ovens and to obtain clay. After the conquest of Seville by Christians in the 13th century, an hidden image of the virgin was revealed inside one of the caves. In order to venerate the icon, the Catholic Church decided to build the chapel of Santa María de las Cuevas.

In the 15th century, the archbishop of Seville was aided by the noble family of Medina, and together found a Franciscan monastery at the site. Later constructions were patronized by don Perafán de Ribera who also built the Casa de Pilatos for the Medina family.

Later on, monks of the Saint Bruno cloistered order were housed in the monastery. In the early 19th century, the monastery was sacked and used as barracks because of the the Napoleonic invasion. Once it ended in 1812, the monastery was abandoned and then affected by the general closure of monasteries in 1835.

In 1840, a Liverpool merchant called Charles Pickman bought the abandoned monastery, and transformed it into a factory of ceramic tiles and porcelain china. As a result, several ovens where built around the monastery and you can still see them nowadays. The factory continued to produce tiles until 1982.

In 1964, it was declared a national monument, and it was bought by the regional government of Andalucía. Thanks to the Seville Expo’92 huge restorations were made to recover a complex that was in very bad conditions. Finally, in 1997 it became the site of a museum of contemporary and ceramic art.

What to expect from the CAAC

The Andalusian Center for Contemporary Art is housed in a former monastery turned ceramic factory which is tastefully integrated into the space of the museum, towering brick kilns and all.

In addition to being a marvelous space to wander, the collection emphasizes the history of contemporary art in Andalucía as well as it honors the artistic movements and relevant issues of artistic creation today and over time in Seville and throughout Europe.

The CAAC has a permanent collection focused in particular on the history of contemporary Andalusian art. Temporary exhibitions, seminars, workshops, concerts, meetings, recitals, film cycles and lectures are also held at the museum.

From a chronological point of view, the collection of the Centro Andaluz de Arte Contemporáneo dates from the mid-1950s extending to the present day.

Wow, this package has everything! You’ll be picked up at your hotel to start a comprehensive tour of the city including a leisurely Guadalquivir River Cruise from where the views of La Maestranza and Triana are spectacular.

But there’s more because your tour continues with a visit to the Isla de la Cartuja where most of the Expo’92 pavillions and bridges are.

After discovering the impressive modern Seville, you will be taken to the Monasterio de Santa María de las Cuevas. Columbus prepared most of his voyages to the American continent there. It’s now the Andalusian Center for Contemporary Art, where modern and ancient blend in a sublime environment.