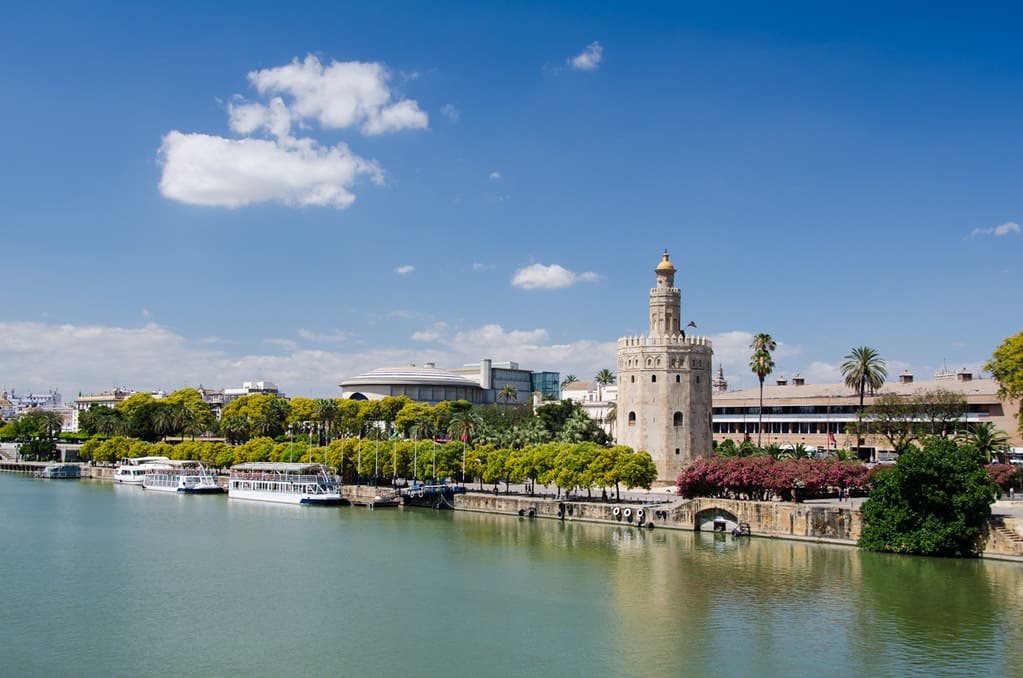 The Torre del Oro, one of Seville’s most recognizable landmarks, means the gold tower. It dominates the Guadalquivir river banks and it’s probably one of the most photographed sights of the city. You can enjoy some spectacular views from the top so bring your camera with you.

The Torre del Oro was built in the 13th century (1220-1221) during the reign of the Taifa Kings, a time when Spain was invaded by the Moors. The main body has a 12-side floor, whereas the upper part has a 6-side floor and was an addition of Pedro I of Castile (the same that ordered the construction of the Mudejar Palace). The circular top end was added during the 18th century (around 1760).

Reduced ticket (Seniors and Students with proof of status): 1.50 €

Free on Mondays and for children under 6 years

It is currently a Naval Museum. Among the things that you can see are prints, nautical charts, models, navigational instruments and ancient and historical documents. It showcases the naval history of Seville, the importance of the Guadalquivir river and the footprint of the illustrious Spanish marine history.

The history of the Torre del Oro

Being part of the city walls, its purpose was to protect Seville and prevent the Christians to attack it from the river. Actually, there was a twin tower on the opposite bank of the river (Triana) in order to draw a large chain to block the River Guadalquivir. Unfortunately, nothing remains of the Gold Tower’s twin sister, probably because it was destroyed by the 1755 Lisbon earthquake.

The origin of the name, Torre del Oro, is still uncertain. Some claim it is because the tower was used as a storage depot for precious metals (mainly gold and silver) and other riches brought to Spain from the Indies (i.e. the Americas). However, after its restoration in 2005, experts discovered that the building was covered with a lime and straw mortar, giving it this golden reflection.

Currently, it is one of the symbols of Seville although it has been traditionally underestimated compared to the Giralda tower. However, Sevillians have always proved its love and have saved it from demolition in many occasions.

After Fernando III of Castile conquered the city in 1248, the tower was completely abandoned. In the 16th century it almost collapsed and some works kept it standing. The earthquake of 1755 caused serious damages to the structure and in 1760 an architect planned to level it down. The inhabitants of the city protested against and wrote a letter to the King, who finally decided to save it.

During the 1868 Revolution, part of the city walls were put up for sale and the tower was again threatened with demolition. Once more Sevillians intervened and saved the Torre del Oro, resulting in a symbol of fight and survival.

The tower has been used as a fortress, a chapel, a warehouse, a prison and even as the Guadalquivir River Company main office. Today it is the Naval Museum.

The Torre del Oro is included in a small-group walking tour that takes you on a journey to the best of Seville monuments where you’ll learn about its gorgeous architecture and beautiful cultural heritage.

This journey features the impressive Cathedral dating back from the 15th century and the Giralda tower, an old minaret transformed into a bell tower by the Christians. Learn about the Torre del Oro, its defensive position over the Guadalquivir river and the panoramic views that you can see from the top.

Don’t miss the opportunity to stroll around one of the symbols of the city!