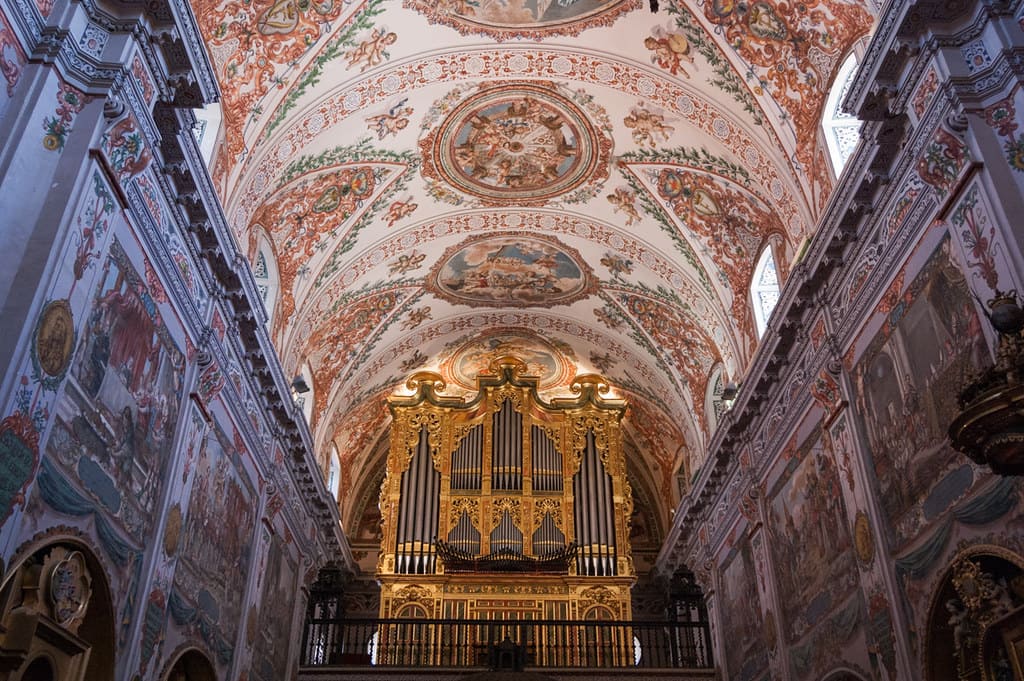 One of Sevilla tourism highlights, the Hospital de los Venerables is definitely a not to miss building of the city. It is located in the most ancient neighborhood, the Barrio de Santa Cruz, also known as the Judería as it used to be the Jewish quarter.

It was originally a hospital but since the restoration works (1987-1991) it is the headquarters of a Foundation where exhibitions, concerts and seminars are held.

Reduced ticket: 2.75 € (Seniors and Students with proof of status)

Your ticket includes an audioguide in Spanish, English and German. You’ll be asked to leave the building 10 minutes before the closing.

You can also ask for a guided tour at the ticket office that will explain you both the Hospital and the exhibition. In my opinion, the audioguide is more than enough and it gives you the chance to walk at your own pace and listen to the explanations you prefer.

The founder Justino de Neve ordered in 1675 the construction of a residence for the venerable priests and the works ended in 1697. Justino de Neve was canon of the Seville Cathedral and is buried there.

The institution was financed by the Brotherhood funds, people’s charity and the support of the monarchy. However, in 1805 bankruptcy was a terrible threat… and in 1840 the Hospital became a textile factory forcing the transfer of the priests to a chamber at the Hospital de la Caridad.

Fortunately, in 1848 a Royal Order gave back the Hospital to its legitimate owners who still hold the property. In 1987, the Brotherhood and the Archbishopric of Seville reached an agreement with the Sevilla tourism and art Foundation FOCUS-Abengoa. In exchange of the restoration works, the Foundation was granted the use of the premises as its headquarters for a limited period of time.

This two-storey building is a classic example of the 17th century Baroque style, predominant in Seville at the time, and has a carriage-entrance leading to a central courtyard or patio and a church.

The patio is characteristic of all Sevillian houses although, in this case, it might also look as a cloister. As usual, the patio is square-shaped and has a gallery of arches around it. The central fountain is surrounded by a concentric flight of steps made of brick and tiles. It was designed this way because the Hospital was built at a higher ground level than the street one causing water supply problems.

What you can see today is very much the original patio as it has just suffered some minor modifications. Even the white and red colors are original… and also the symbol of other Sevilla tourism attractions like the Sevilla FC, one of the city’s main football teams.

The ground floor infirmary was located on the eastern side of the patio and it is an exhibition room now. On the upper floor, you’ll find another exhibition room that used to be an upper infirmary and also a place to find shelter from the cold winter days.

You can reach the upper floor using the beautiful staircase where you’ll see a dome with plaster decorations.

The church at the Hospital de los Venerables

If you walk straight from the entrance and cross the patio, you’ll get to the church entrance.

The church was built in 1689 and is devoted to San Fernando (Fernando III of Castile, the first Christian King to live in the Alcázar after conquering Seville from the Moorish invasion). It was entirely painted, both walls and ceiling, by Juan de Valdés Leal and his son Lucas Valdés. Their works have been fully preserved and can be seen as soon as you enter the church.

The figures of San Fernando (Saint Ferdinand) and San Pedro (Saint Peter), located under the choir, are masterpieces of the sculptor Pedro Roldán.

Murillo, friend of Justino de Neve, also painted a work of art for the Hospital: the Inmaculate, one of its most famous masterpieces that can be seen at the Prado Museum (Madrid).

Don’t miss these must see corners

THE spot in the Hospital de los Venerables is its church. It is one of the few painted churches that remain in the city which it’s a shame because you get a real taste of the importance that religious buildings had at that time. They were our current museums of art.

The altarpiece is spectacular and quite peculiar as it is composed by four paintings instead of the usual wood carvings.

Please, take a careful look at the golden balconies that are at each side of the nave… you’ll have the chance to discover why further on.

And finally, it is a very cool place if you want to escape the heat of Sevilla. Tourism offices and guidebooks should have warned you by now…

The patio is wonderful for its colors and harmony. On top of it, the sound of the fountain’s water is delightful. There is also a small courtyard on the left hand side full of flowers, usually geraniums, a very typical plant in Andalucía.

The staircase is very interesting with its dome and tiled walls. It will surely remember you other Sevilla tourism highlights such as the one at the Alcázar, the Casa de Pilatos or the Palacio de Lebrija.

But the most interesting spot in the upper floor is located at the opposite side of the staircase exit. Walk across the patio and you’ll find a couple of doors that lead to two tiny balconies. Does it ring a bell? Of course! The church ones… if you are careful and patient enough you can admire the church paintings in detail looking through the small holes of the wood decorations…