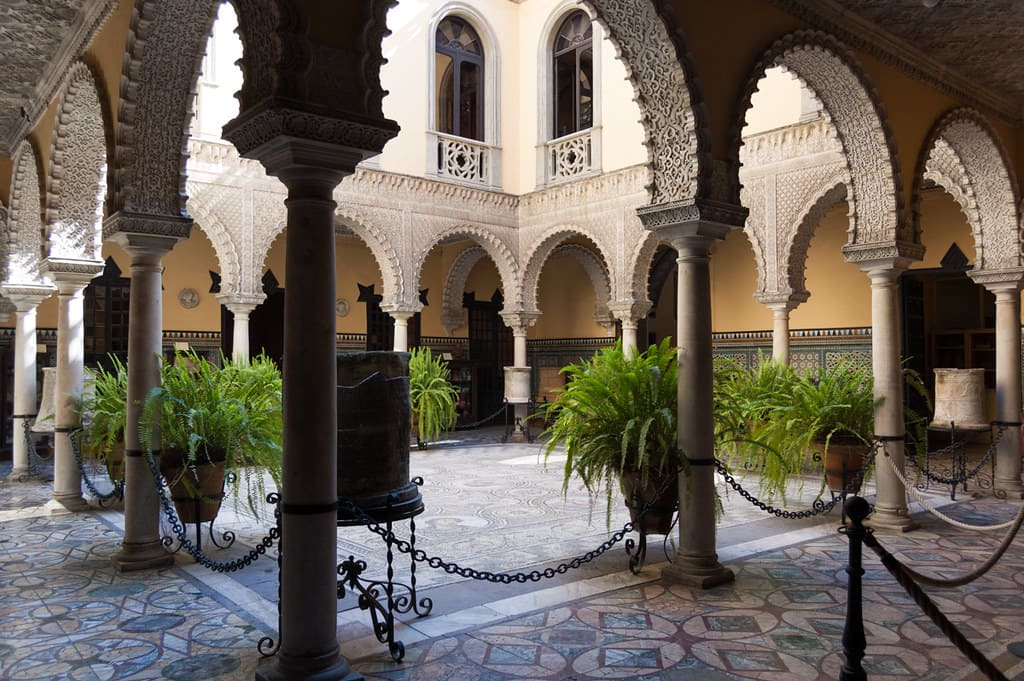 Located in Sevilla, Palace of the Countess of Lebrija, also known as Palacio de la Condesa de Lebrija, gathers one of the most complete and astonishing collections of Roman mosaics of the region. And almost without a doubt, of Spain.

This absolutely wonderful Sevillian palace is, along with the Casa de Pilatos, one of the few mansions that can be visited in Seville. The structure is organized around a main courtyard, with a couple of small patios behind and an upper floor that the family uses from time to time.

The organization is similar to the Casa de Pilatos. You can chose to visit only the ground floor or both the ground and upper floors.

You cannot visit the upper floor on your own, hence tours are always guided. When you purchase your ticket, you’ll be told the schedule of the tours. Just wait at the bottom of the staircase until the guide arrives. And don’t lose your Complete House ticket because you’ll be asked to show it. The guided tour lasts half an hour.

You shouldn’t buy the Complete House ticket. It is not really worth it. The upper floor is actually stuffed with hundreds of objects and furniture that the Countess gathered while travelling around the world. Except for a couple of paintings (a Van Dyck in pretty bad shape and a Sorolla), the rest is not very interesting.

The Palace was originally built in the 15th century and renovated in the decades after according to the artistic tastes of the time.

In 1901, the Countess of Lebrija bought the palace and started extensive renovations that would end in 1914.

The Countess was an avid collector and traveller. In fact, she was passionate about archeology and the first woman to be accepted at the Fine Arts Academy of Saint Elisabeth of Hungary (founded in 1660).

The Countess decorated her house with all the artistic elements she gathered over the years. The collection incorporates lots of Roman mosaics found in Italica (currently Santiponce, 7km from Seville), Mudejar elements from the Arab invasion, traditional Andalusian tiles and even parts of an old convent.

This Sevilla palace is very interesting both for its architecture and for its collection.

The Countess actually rescued a big part of the Roman city Italica that had been sacked for two centuries. The best piece is the main patio mosaic related to the god Pan. Its enormous size and its excellent conservation make it the most important masterpiece of the palace.

Apart from this one, other rooms display a large number of mosaics, all with different shapes, sizes, colours and subjects. You can see them on the floors and hanged on the walls. The collection is absolutely impressive.

Apart from the mosaics, the lower floor rooms display also some Etruscan and Roman ceramics as well as marble statues. You can have a look at old jewels and military awards and decorations as well.

Finally, the tiles decorating a few rooms, the main patio, the staircase and especially the entrance are very original and beautiful. Take your time to have a closer look and spot all the details.

As usual, this Sevilla palace entrance is quite spectacular, particularly because of the bright ceramics covering it and the iron gate.

The main patio is awesome and the mixture between the Mudejar style (typical of a patio sevillano) and the Roman elements, especially the floor mosaic, are particularly original. Although you can see this structure and Mudejar elements at the Palacio de Don Pedro and the addition of Roman statues to it at the Casa de Pilatos, this courtyard is cozier.

The views of the patio from the back room windows are gorgeous. And while you are there, take a closer look to the mosaic of the floor to check the geometric figures similar to swastikas. Actually, it is not an isolated one but clearly a repeated element of the decoration. Interestingly, they are found quite often in Roman art.

The origin of the swastika dates back from the Neolithic (6th to 5th millennium BC). Both Greeks and Romans used this decoration in their architectural, clothing and coin designs. In fact, isolated swastikas are relatively rare, and the swastika is more commonly found as a repeated element in a border. It was used to represent perpetual motion, such as the one of a rotating windmill or watermill.

Finally, the mosaics of the room at the far right end are very interesting, especially one with a boar and two other animals. Unfortunately the light of the room should be improved. Still, the conservation of the mosaics is impressive!