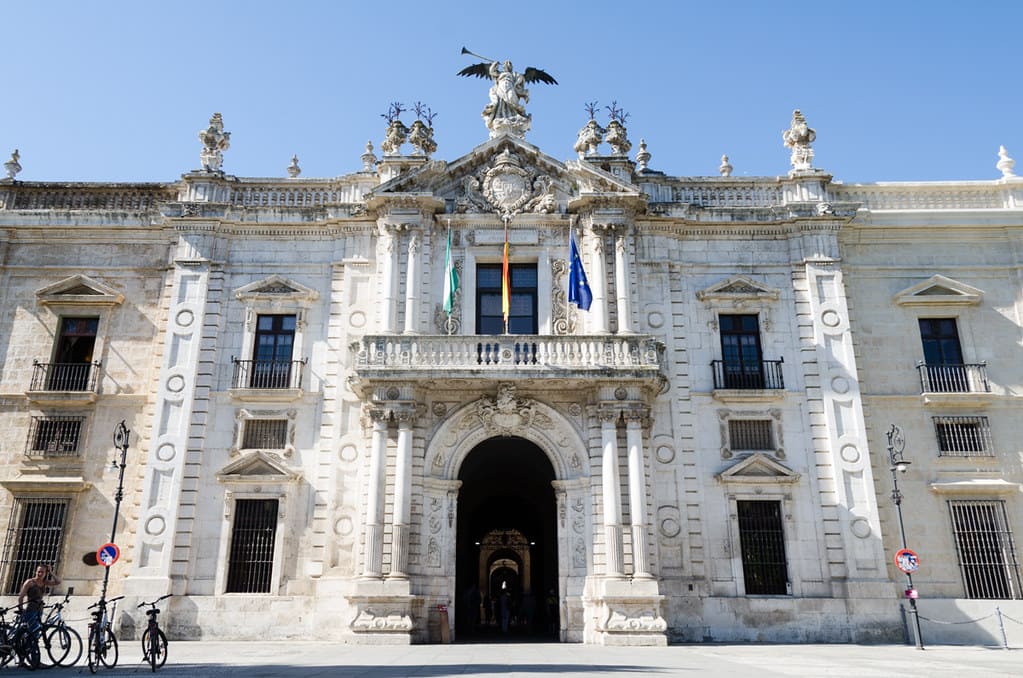 The Seville University is scattered in several campuses located in different neighborhoods of the city. The most representative and famous one is the Real Fábrica de Tabacos (Royal Tobacco Factory), built in the 18th century and used as a tobacco factory until the 1950s. The factory was the largest industrial building of the world at the time and it took 42 years to finish it.

The Seville University is a unique and historic institution, one of the oldest universities in the Spanish-speaking world, having over five centuries’ of continuous existence. Just cross the fence and feel free to wander around…

One of the best things of visiting the Seville University is that you can freely enter the premises and start visiting on your own. Just mingle with the students, enjoy the atmosphere of tradition and knowledge spread around and discover one of the most amazing buildings of the city.

To introduce such a unique place here are a few curiosities:

History of the University of Seville

The Seville University dates back to the 16th century and its first main building was the Colegio de Santa María de Jesús (Virgin Mary of Jesus School), founded by Arcediano Maese Rodrigo Fernández de Santaella at the end of the 15th century. In 1505 Pope Julius II confirmed its use as a university with a papal bull (decree of the Pope) and the institution was officially considered a university although courses started in 1516.

The first Schools were Theology, Canon and Law, Medicine and Arts. Mathematics was added in 1768. In 1771 the Seville University moved to the first residence of the Jesuites Brotherhood, the Casa Profesa (Calle Laraña, 3), after the order was expelled.

Today, the ancient Casa Profesa is the Fine Arts School but the original building was torn down in 1970 keeping only the columns at the patio. You can go inside and take a look at them yet it is just a compact mass of bricks and concrete, typical of the 1970s and Franco’s massive and impersonal constructions.

The Seville University was controlled by the Church until the middle of the 19th century.

This period, known as the Desamortización (Secularization and Sequestration), was in fact the State’s spoliation of the Church and nobility patrimony on the grounds that the assets were non productive.

Its aim was to auction them, increasing the State’s wealth to finance the debt emissions and cover the deficits in the public accounts.

In 1954 the University was finally moved to the Real Fábrica de Tabacos, after the factory’s closing. From then on, other buildings were needed as the number of students started
to increase substantially. Today, the old factory holds the Rectorate.

The origins of the building

The Real Fábrica de Tabacos was built between 1728 and 1770. The project was designed and supervised by several military engineers. The works were abandoned for a long period (1735-50) due to financial constraints (the initial budget was clearly not enough) and because the engineers and architects in charge were not fully committed.

Its huge size (rectangular area of 27,195 square m or 292,725 square ft) is only smaller than El Escorial Monastery (area of 33,534 square m or 360,957 square ft) located near Madrid. With a mixture of architectonic styles, the building is divided into two areas, one devoted to the tobacco process and a smaller one that included the entrance, offices, depots and apartments for the superintendent and the director.

The importance of the tobacco industry

The Spaniards were the first Europeans to see the tobacco plant upon their arrival to America. Seville had the monopole of the trade with the whole continent and when tobacco plants were brought to Spain the industry started to flourish in the 16th century, requiring the building of factories to process them.

Initially, the factories were pretty small and distributed randomly across the city. However, it was decided to gather them in a sole facility for health reasons and to control the production. The first big factory was located in front of the Iglesia de San Pedro. But it would soon become too small, forcing the construction of a bigger new one, the Real Fábrica de Tabacos.

Until 1812, only men worked at the factory because the production of powered tobacco needed a physical strength that women do not have. Moreover, it was socially unaccepted that men and women worked together at the same premises.

When the demand of cigars increased and the cigarette was introduced in the market the process became much more delicate. These trends caused the entrance of women in the factory. First because they were able to make higher quality cigars when manipulating the tobacco leaves. But also because their salary was considerably lower than a man’s one, enabling the company to increase the workforce without rising the costs.

By the end of the 19th century the appearance of new machines improved the process and the cigarreros (almost all women by then) were replaced. Finally, the factory closed in the mid-20th century.