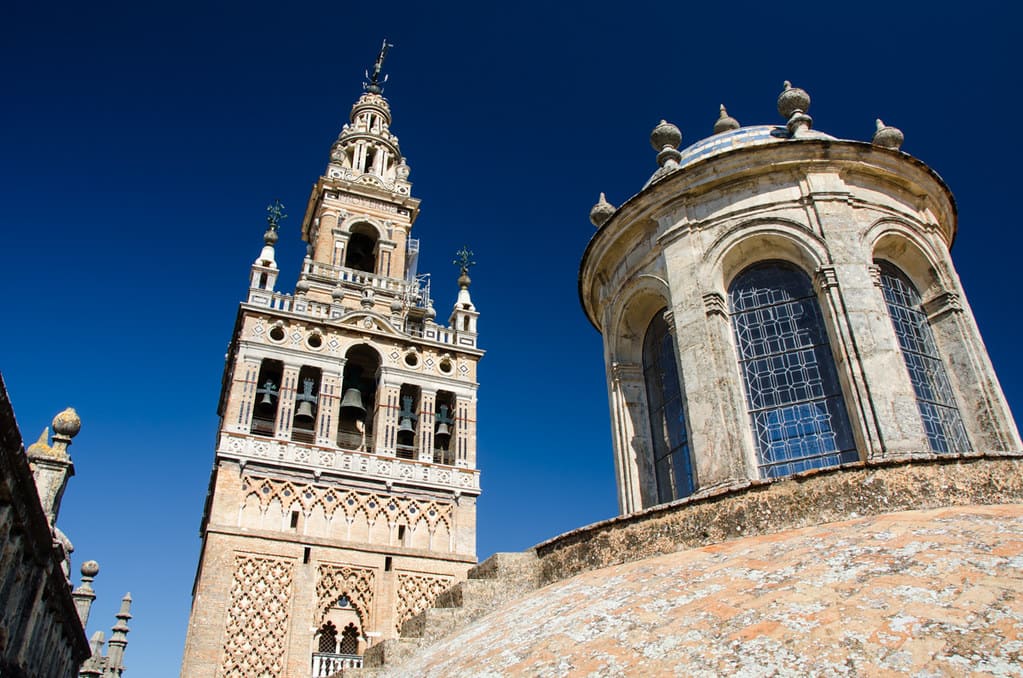 There is an amazing list of sights in Seville, Spain’s most beautiful city according to most. It has an incredible appeal to both foreigners and Spaniards because of its light, the way Sevillanos enjoy themselves and its gorgeous architecture. Seville is one of the most romantic cities in Europe with a mixture of Roman reminiscences and Moorish traditions. So, without a doubt, you’ll be pretty soon delighted by its charm and passion.

Seville is full of exuberance and history. It has gone through wars, invasions and has been home of many kings. As a result, the city is colorful, vivid and it is home of many Spanish symbols and marvelous monuments that you have surely seen before. If not, keep reading as this is what this guide is for!

Seville has also some hidden gems that, fortunately, are still not included in the touristic circuits. And trust me, you are going to see loads of tourists in some places… especially the taking-pictures-of-everything type you want to avoid! These are places independent travelers sometimes just never heard about them or skip because they don’t have enough time. Don’t be one of them!

This is an overview of the most visited and well known monuments of Seville. Don’t worry, you have plenty of choices: Seville is full of little big secrets waiting for you!

By the way, admission to all these monuments is included in the Sevilla Card.

Despite many consider it “touristy”, a great sightseeing activity in Seville is to to take a a tour on a hop-on hop-off bus ride along the city.

It’s a nice way to get an overview of Seville from every corner, while you sit back and relax. On top of it, you can get off as often as you want to get a closer look. And you can even enjoy a guided walking tour!

The Cathedral of Seville

The Seville Cathedral is the biggest Gothic cathedral in the world and also the 3rd biggest one in terms of size, after Saint Peter (the Vatican) and Saint Paul (London, UK). Its construction started in 1401, after the Christians reconquered Seville, and it ended in 1506.

The aim was to convey an image of confidence and wealth after seven centuries of Arab occupation and it certainly does!

Read a complete guide of the Seville Cathedral »

One of the highlights of Seville is the Giralda tower.

Probably the most visited monument of the city along with the cathedral, you should definitely not miss it.

Everything you need to know about the Giralda Tower »

Known as the Royal Alcázar, Seville’s royal palace was originally a Moorish fort, built in the 10th century by the first Caliph of Andalucía. The construction of the current palace-fortress began in the 14th century.

Islamic, Gothic, Renaissance and Baroque elements can be found, but my favorite one is the Mudéjar Palace, the best example of this architectural style in Spain. The gardens are perfect to walk around and enjoy the spring like weather of the city.

Practical information on the Alcázar »

The Torre del Oro was built in the 13th century (1220-1221) during the reign of the Taifa Kings in Seville. The Moors were ruling Spain at the time.

Being part of the city’s walls, its purpose was to protect Seville from the river side and to control the entrance of the harbor. It is now one of the symbols of the city and the views of Triana riverbank for its top terrace are definitely worthwhile.

Guide to the Torre Del Oro »

The Hospital de los Venerables, located in the Barrio de Santa Cruz had the purpose to shelter and take care of the poor, sick and handicapped priests.

This two-storey building is a classic example of the 17th century Baroque style and it is currently used by a Foundation that holds temporary exhibitions.

Apart from the building and its beautiful patio, the Hospital de los Venerables has one of the most astonishing churches of Seville with impressive masterpieces and the walls and ceilings fully painted with amazing frescoes.

The exuberant and magnificent Plaza de España is located in the Maria Luisa Park and was built on the occasion of the Ibero-American Exposition World’s Fair that took place in Seville in 1929.

This huge square, that needed as much as 1,000 people working simultaneously to build it, represents the embrace of Spain and its ancient colonies and it is orientated facing the Guadalquivir River as a path to America.

Don’t miss the series of 48 tiled alcoves or benches, each representing a Spanish province, and pick your favorite one!

Wander around the Plaza de España »

You may want to discover some of Seville’s hidden gems…