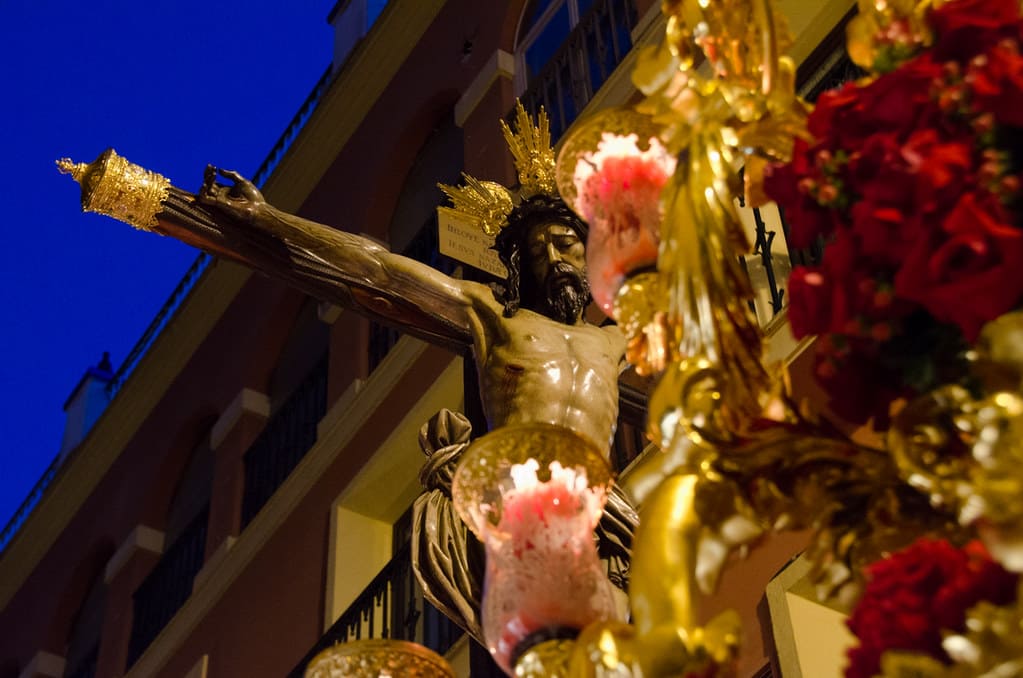 Semana Santa in Seville is probably the most famous Holy Week celebration in the world.

During seven days Seville transforms itself into an incredible art and music performance. Even though Semana Santa in inspired by Christian facts and religious beliefs, you shouldn’t miss this amazing spectacle.

What is Semana Santa?

Semana Santa in Spanish is the equivalent of the Holy Week. It’s one of the most important events of the city along with the Feria de Abril.

For seven days, starting on Palm Sunday and ending up in Easter, Sunday morning, more that 50,000 people wear traditional robes to parade in one of the 60 procesiones that take place.

The origin of these festivities dates back from the 16th century when Sevillanos started to celebrate the passion and death of Christ. In order to confer solemnity to the event, religious brotherhoods (hermandades and cofradias) organized processions.

A procession is a religious parade with a designated route. Each procession has two or three pasos, one or two of them representing a scene of the Passion, and the other one an image of the Virgin Mary.

A paso resembles a huge, ornate table about 2 m (7 ft) high, with a velvet hem hiding both its legs and the costaleros from view. The pasos are made of wood, usually covered in precious metals, and are intricately worked and decorated.

This combination of Baroque style and decorations made with lots of flowers (sometimes the same, sometimes different species) and candles are spectacular. On top of it, the candles are only lit by night, transforming the paso into an illuminated scene absolutely impressive.

I would say that one of my favorite things of Semana Santa in Seville is looking at these animated masterpieces and admire their details.

As I said before, there are two kinds of pasos: El Cristo (Christ) and La Virgen (The Virgin).

The pasos dedicated to El Cristo, which depict scenes from the Passion, are usually floats covered in gold. You will notice different kinds and sizes depending on the number of figures on top of it (up to 13 in the case of La Cena, the last supper!).

Some brotherhoods have chosen to represent scenes before Christ’s death. These pasos are called misterios (misteries). And they represent for example the entrance of Jesus to Jerusalem, the trial, the cross given to Jesus, the Judas’ kiss, Jesus carrying the cross himself, and many more). Others have preferred a paso with Christ on the cross (called a crucificado).

The pasos dedicated to La Virgen are usually covered in silver, and they represent a very dramatic image of the Virgin Mary, generally in tears. This image is called a dolorosa (literally, in pain). In most of the pasos the Virgin Mary is alone although she can be accompanied by an apostle or holding her Son in her arms.

All the dolorosas are covered by an ornate canopy or baldachin (palio) attached to the structure. The palio is supported by six poles (varales) on each side.

The costaleros are the most important members of the processions, and without them Semana Santa in Seville would never take place. They carry the paso supporting the beams upon their shoulders and necks. And they also lift, move and lower it. The costaleros consider a once in a lifetime honor carrying the paso as it’s a sign of devotion and penance.

This is usually a task performed by men as the pasos often weigh over 2,000 kg (4,400 lbs) and it takes many months of practice before the big day. On average there are 40 costaleros per paso with each one supporting a weight of around 50 kg (110 lbs) for approximately 8 hours.

Because the costaleros are totally hidden and packed, the capataz (overseer), located on the outside, guides the team by voice, and/or through a ceremonial hammer – el llamador (caller) attached to the paso.

As a result, the costaleros try to move the paso according to the rhythm of the music, giving the observer the impression that the figures are literally walking. Each brotherhood has a distinctive way to raise and move a paso, depending on its traditions, style and philosophy.

The nazarenos are probably the most famous characters of Semana Santa in Seville. They precede the pasos and generally march in silence, sometimes barefoot. They are dressed in a habit, wear a cape and hide their face behind a pointed hood (capirote).

Apart from that, they hold either long wax candles (cirios), a pole (vara), a standard or a lantern. Usually the nazarenos march in pairs, and are grouped behind an insignia.

If you are interested in this fascinating subject, you can keep reading about the procesiones and the brotherhoods.

And if you plan to spend your holidays enjoying Semana Santa in Seville, have a look at my tips and recommendations.