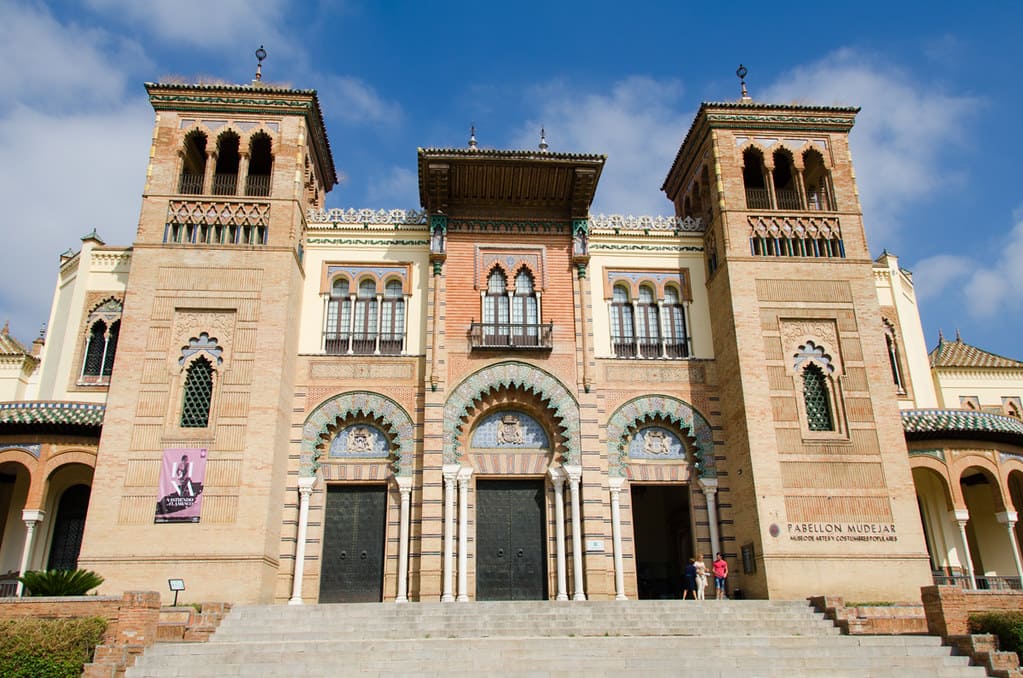 The Museo de Artes y Costumbres is a fine Seville museum where you can get to know more about Spanish traditions and life in Spain. It displays anthropological and ethnographic collections, such as ancient craftsmanship, agricultural production and furniture.

4 keys to the Museo de Artes y Costumbres in Seville

The museum displays a collection of traditional clothing and decorative arts representing the culture of Andalucía and the everyday life.

The building occupied by the museum is known as the Pabellón Mudéjar and it was built between 1913 and 1915. The Mudéjar style is an architectural mixture of elements from the Muslim and Christian cultures very popular during the Middle Age (12th to 15th centuries) and present in many regions of Spain and buildings in Seville (e.g. the Alcázar of Seville and the Casa de Pilatos).

It was also a permanent pavilion for the 1929 Ibero-American Exhibition, known as the “Pabellón de Arte Antiguo e Industrias Artísticas” (Ancient Art Pavillion and Artistic Industries).

The Museo de Artes y Costumbres was inaugurated in 1973. Unfortunately, the building was in such bad conditions that it was closed for restoration in 1979. After 5 years of works, the premises were opened again in 1984.

The Maria Luisa Park is where both the Museo Arqueológico and the Museo de Artes y Costumbres are located. The park is Seville’s largest green extension and it’s the perfect surrounding for such beautiful constructions. The 2 museums can be found at the Plaza de America (America Square) and they were built along with the Plaza de España for the 1929 Exposition.

What to expect from the Museo de Artes y Costumbres

The Museo de Artes y Costumbres was designed to display the customs and the way of life of the elements displayed. As such, you don’t just see the objects displayed, but the museum aims to “bring them to life” so that they speak for themselves.

It was created to show the particularities of the culture of the area, both in terms of objects and utensils and the practices in which they are used. That is why its rooms gather a compendium of knowledge, customs and ways of life typical of Seville, while highlighting the modification that these had over time.

The museum is presented as a space for the defense of cultural plurality and takes advantage of ethnographic and anthropological resources to promote a vision of respect for identity in diversity.

Among the museum’s most notable collections, you can see beautiful ceramics, traditional dresses, incredible jewellery and gold work, popular musical instruments, lace and embroidery and objects as special as posters for festivities, collections of games and postcards.

Most of the collections of the Museo de Artes y Costumbres are the result of years gathering common objects used in the ordinary life. The main purpose of the museums is to show you how people lived in Spain centuries ago. Among the many things that you can see, here is a list of the most interesting ones.