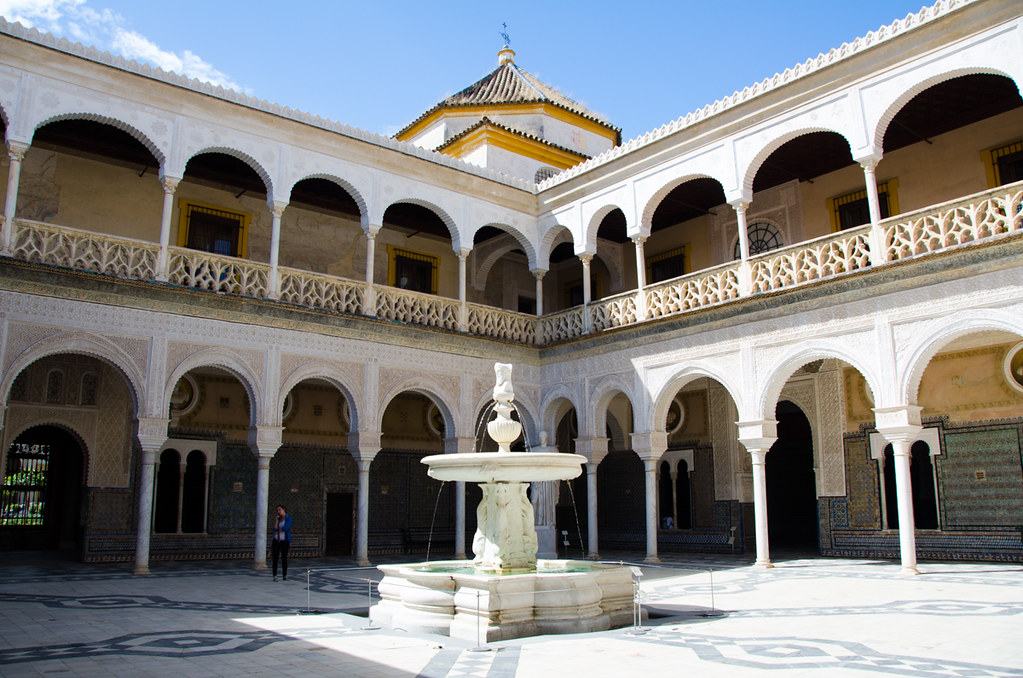 The Casa de Pilatos is the best Andalusian palace of Spain and an example of the 16th century Sevillian architecture. It is also known as the Palacio de los Adelantados Mayores de Andalucía (Palace of the Governors of Andalusia).

It was built between the 15th and the 16th centuries and it is one of the biggest private residences of Seville. Located in the historical center, its Gothic Mudejar style, wonderfully combined with Renaissance innovations, is one of the highlights of the palace.

You can chose to visit only the ground floor or both the ground and upper floors. Tours of the upper floor are always guided and you cannot visit this part on your own. If you want to have a look at the upper floor wait at the top of the staircase until the guide arrives. You’ll be asked to show your Complete House ticket.

The construction of this palace was an idea of Pedro Enriquez de Quiñones (Adelantado Mayor of Andalucía) and his wife Catalina de Rivera, although it was completed by their son. His pilgrimage to Jerusalem in 1519 is the origin of the current name of the house.

According to tradition and popular belief, after his return he discovered that the distance between the ruins of the home of Pontius Pilate and Golgotha (site where Jesus was crucified) was the same as that between his palace and a temple located outside the walls known as the Cruz del Campo (Cross of Field).

Surprised by the coincidence, he established the Via Crucis (Stations of the Cross) of the Cruz del Campo in 1520. The First Station was initially the Casa de Pilatos’ chapel, representing the exit of Jesus from Pilate’s house. But the Via Crucis became so popular that in 1529 it had to be celebrated outside of the palace.

This tradition changed the palace and its rooms’ names along with the theme of the Passion of Christ.

As time went by, the Enriquez de Quiñones family bought some of the constructions nearby the first palace and ordered the building of new rooms, gardens and patios resulting in the complex we can visit today.

The Casa de Pilatos is one of my favorite places in Seville. First of all because it is not within the usual tourist circuits and people generally miss it. So you’ll probably be lucky enough to visit it with other 10-12 people.

I also love the mixture of architectural styles, from Gothic to Mudejar and even Italian. It is very interesting to see how the palace has grown as time went by with new constructions, additions and elements that have completed the original structure.

It’s also a funny way to learn a little bit more about Spain’s history, the influence the Arabs and Italians left in the country and to really understand that European countries have been linked for ages. The Arabs were in Spain for almost eight centuries (711-1492) and some parts of Italy (Naples, Milan, Tuscany, Sardinia and Sicily) were Spanish from 1559 to 1714.

The whole Casa de Pilatos complex is awesome and despite there is almost no original furniture or decorative elements left, you truly have the impression of being back in time.

And I would like to recommend you a few highlights…

One of my favorite rooms is the Chapel of Flagellation, considered the oldest of the palace. It is definitely a very particular chapel because the tiles and mosaics give you the impression of being in a mosque and not in a Christian temple. In addition, you’ll find a Roman sculpture in the altar. This statue is probably a pagan representation of a Roman god. I find this religious melting pot quite peculiar.

Despite the Small Garden is very cute, I clearly prefer the Large one not only because there is more space to walk around but also because of the beautiful loggias (Italian word designating an external corridor with arches). It’s great to go there in early spring with all the flowers in full blossom.

Finally, the staircase is spectacular. The Casa de Pilatos was the first private house to have one in Seville and it was a very important part of the palace being the natural division between the patio, where the receptions took place, and the private rooms at the upper floor. Look up to admire the dome, a demonstration of the family’s wealth and similar to the one in the Ambassador’s room in the Alcázar.

In my opinion, the upper floor is not really worth it. The visit is more focused on recreating the interiors of the palace (i.e. furniture, paintings, and tapestries) but the architecture is not as spectacular as it is at the ground floor. However, if you feel you want to visit the entire palace, go for the full house entrance ticket but if you are short on time, don’t worry if you skip it.