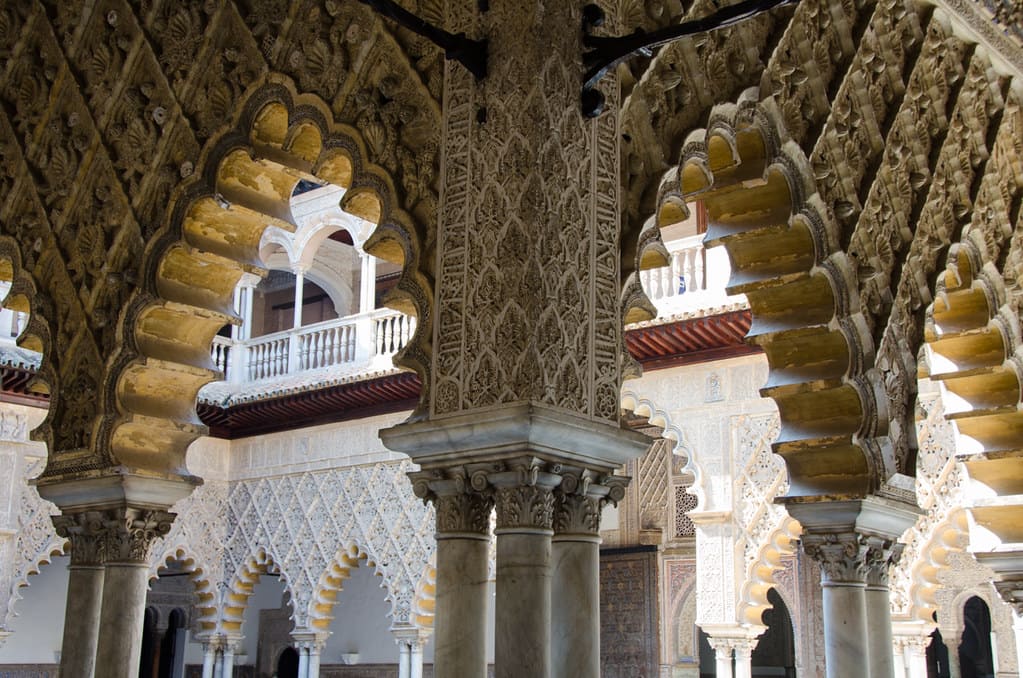 One of my favorite places in Seville is the Royal Alcazar. Spain has dozens of them spread all over the country but only six are Royal. They are located in Seville, Madrid, Córdoba, Segovia, Toledo and Guadalajara (the three last ones are towns close to Madrid). I’ve visited all six and the most impressive and beautiful is the Sevillian one.

What’s an alcázar? It’s a palace-fortress built by the Arabs during the time of the Moorish invasion. The word is a synonym of castle (castillo) and it comes from the Arabic word al qasr.

The Alcázar was initially built by the Arabs in the early 8th century and has been expanded by further Spanish Kings, converting it into their royal residence. One of the coolest things about the Alcázar is the mixture of architectural styles that can be observed.

Although the Alcázar has some astonishing courtyards and artistic details, THE highlight is the Mudejar Palace. An absolute must!

If you plan to visit the Alcázar, have a look at the practical information.

The Mudejar Palace, also known as the Palacio del Rey Don Pedro, was built by Pedro I of Castile in 1364. He employed Jewish and Moorish workers and craftsmen from Seville, Granada and Toledo. They designed an exquisite building from scratch (it has been proven that there are no ancient constructions below it).

The Palace was completed adding elements of other buildings, mainly from Cordoba, Granada (very important cities at the time) and even rests of the Roman ruins of Italica, near Seville.

It is located inside the Alcázar walls and you can access it through the main entrance located at the Courtyard of the Hunt (Patio de la Montería).

Guided viewing of the Royal Alcázar

One of the best ways to get to know the history of Seville is by booking a 3-hour guided tour of the Alcázar.

Additionally, you also visit the famous Cathedral, the biggest in Spain and the 3rd largest in the world. On top of it, you have the chance to wander around the Barrio de Santa Cruz, Seville’s historical Jewish quarter and one of the most picturesque areas of the city.

A knowledgeable English-speaking guide leads you to every palace and courtyard while explaining you everything about the history and architecture of this magnificent complex. Definitely worth it.

From the main hall, go straight and you’ll end up at the Maidens Courtyard. The hall has also a narrow corridor from where you can get to the Dolls Courtyard, allowing you to walk around the official rooms.

The Maidens Courtyard is the main patio of the palace and gives access to the most important rooms. It’s named after the Moorish annual tradition of demanding a hundred virgins from their Christian kingdoms.

It has a reflective pool with sunken gardens on either side. The lower arches are a classic of the Mudejar style, with very thin columns and an impressive decoration at the top. There are a bunch of small but delightful details, like the symmetry of each arch and the carvings, similar to an elaborated lace.

The upper floor was added in the later 16th century (between 1540 and 1572) and it is easy to recognize the Renaissance style in it. Despite the differences, both elements end up creating a patio with an amazing harmony.

When I first visited the Alcázar (long time ago, when I was a teenager) the patio was somehow different. The reflecting pool was not there, nor the sunken gardens but a circular fountain. Everything was covered by hideous grey floor tiles because no one actually knew that a pool was down there.

In 2002, an archeological research unveiled the pool and the patio was under restoration for 3-4 years. Actually, the pool and paving were covered at the end of the 16th century (around 1580) because a counselor of Felipe II thought it was “dirty and ugly”.

On the right hand side of the patio you’ll find the Bedroom of the Moorish Kings. This used to be the summer bedroom because it was fresh and protected from the heat, as Seville can be very hot.

The wooden ceiling is a combination of the geometric elements of the Arabic style and some Renaissance decorations.

Also known as the Throne Room, this is the most important room of the palace and it was used for public events and affairs of state. You’ll enter the room walking through a gorgeous arch that still has the original wooden doors built in 1366, can you imagine?

The room is extravagantly decorated with beautiful tiled walls (typically Moorish) and a magnificent cedarwood cupola with elaborated carvings and geometrical patterns (stars, circles, tears and other shapes). Actually, the cupola was an inspiration for the staircase ceiling of the Casa de Pilatos.

The Dolls Courtyard is much smaller that the Maidens one. The origin of its name comes from the small faces that decorate some of the arches.

Actually, you should look for them as it is said to bring good fortune when found.

The columns date back to the Caliph times and come from the destroyed palace of Medina Azahara in Cordoba.

The upper floor was added in the 19th century.

At the Maidens Courtyard, take a look at the rich decorations of the wooden doors. And before you really enter the patio, stop below the main arch and look up, the carvings and colors are impressive.

The Bedroom of the Moorish Kings wooden ceilings.

At the Ambassador’s Hall, don’t miss the plaster details of the walls, just above the tiles.

The upper floor cannot be visited as it is part of the Royal Family private rooms. But you can still go to other parts of the Alcázar that are absolutely stunning.

Don’t miss the gardens where the fountains and other water features, the smell of orange trees (azahar) and the light on a sunny day will be wonderful.